Update!  So where is Joe?  Seems that everyone is noticing that the State of the Union address went missing in February.

Why Is Biden First President Since 1981 To Not Give First SOTU Speech By End Of February?…Will Kamala Have To Step In?

The traditional address to the nation happens in February, so as we flip the calendar to March, inquiring minds are asking when do we see the Joe Show?

The speech often runs two hours long and we wonder if Biden can stand and speak that long.

My guess is that it will not happen and they will blame fears of a domestic terror attack as previewed by the acting head of the Capitol police last week.

President Trump gave a rousing state of the union address yesterday at CPAC which I am sure most of you witnessed.  The big news of course is that he plans to continue his control of the Republican Party and hinted that he is considering a run in 2024.

Heads surely exploded when he uttered this line: “I may even decide to beat them a third time.” 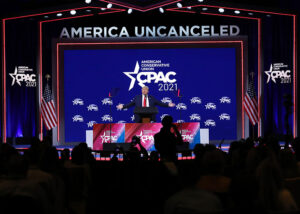 Trump’s ability to speak without pause for hours stands in contrast to the man in the White House that 80 million Americans supposedly elected to lead the free world who can’t seem to go a few minutes without a gaff.

Here is the Washington Times wondering where is Joe?

So where’s the big Biden speech?

There were some observers who declared that former President Donald Trump‘s speech before CPAC on Sunday was actually a State of the Union address. There is some truth to that. His comments covered the state of the union, the state of unity within the Republican Party and conservatism, and the prospects for the future.

Mr. Trump’s appearance, however, occurred just as the public, media and lawmakers themselves are wondering whether President Biden will make the traditional presidential speech before a joint session of the Congress.

So where is the 46th president in all this?

House Speaker Nancy Pelosi advised on Feb. 11 that Mr. Biden would not be making any big speeches until “we pass our COVID relief bill.” The House did that on Saturday.

Other factors, such as the threat of the virus in close quarters, and the security challenge on Capitol Hill, have been cited as a reason for the delay.

“We know that members of the militia groups that were present on Jan. 6 have stated their desires that they want to blow up the Capitol and kill as many members as possible with a direct nexus to the State of the Union,” Acting Capitol Police Chief Yogananda Pittman told the House Appropriations Committee during an appearance Friday.

I was shocked when I saw the stats last night on yesterday’s post, part 3 on community organizing.  And, this morning I see the post has been visited nearly 24,000 times.

That is unheard of for a little blog like mine.  However, mystery solved when a friend notified me that Sidney Powell posted the link at her Telegram account.  Thanks to whoever brought it to Powell’s attention!