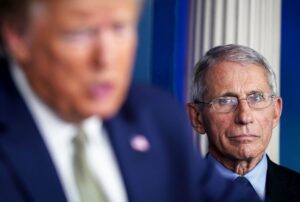 What a dope.  Does he really believe people who are not getting THE Shot, the experimental so-called vaccine, are actually not getting it because of their political views?

I personally know people on both sides of the great political divide who have gotten the shot, and I expect you do too.

Here is Reuters about the much fawned-over Fauci being interviewed by Chuck Todd yesterday.  They are addicted to Trump!

Fauci hopes Trump will tell supporters to get COVID-19 vaccine

“How such a large proportion of a certain group of people would not want to get vaccinated merely because of political considerations … it makes absolutely no sense,” Fauci said.

So what numbers are they talking about?

A poll released this week claimed to show nearly half of Trump supports do not plan on getting vaccinated against the COVID-19 China coronavirus, a statistic that sent shock waves through the COVID state bureaucracy and media.A NPR/PBS NewsHour/Marist poll stated 47 percent of Trump supporters are choosing to not get a COVID vaccine. 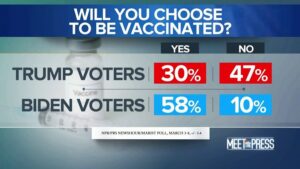 So if you have doubts about the safety and efficacy of THE Shot, you are not alone.

I was surprised to see that 10% of Biden voters were in the NO column, so that would mean that 10% of his 80! million voters, or 8 million Dems, are vaccine skeptics.  Hmmm!

Robert F. Kennedy Jr’s campaign against the shot and against Fauci must be having an impact.

For further edification, see the screenshot (below) of the poll responsible for generating these numbers.

(There are roughly 253 million adults in the US so about 76 million do not plan on getting The Shot.)

But, interestingly the graphic being used by Chuck at Meet the Press does not match the numbers on the actual reported poll data.

The only number on their graphic above that is from the poll is the 58% of Dems (how many Dems voted for Trump?), but besides that, the problem they have in making the comparison between Trump and Biden voters is how can they know how many of the Independents voted for each man.  34% of Independents are a NO on the vaccine.

LOL! I don’t believe the pollsters asked each respondent who they voted for, that might have produced data to indicate that Biden didn’t get as many votes as the Dems claim.

If you are skilled at reading polls, tell me how they got from this data to the graphic above! 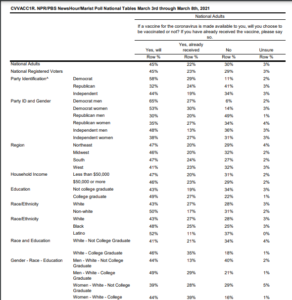 See my post on my views on the China virus shot, here last week.  It is your body, do your homework and choose wisely!

The Silencing of Covid ‘Vaccine’ Skeptics

I was happy to see that someone with a real megaphone is saying it out loud!

If you missed my post from last week, read it now:

From Salon where you know the Lefties are spitting mad:

A Fox News segment on Sunday argued that parents should pull their children out of in-person learning at public schools because it teaches them “how to hate white people.” 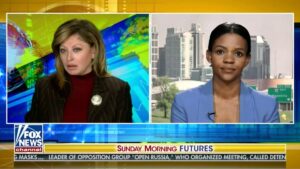 “I know that Megyn Kelly pulled her kids from school for similar reason,” Owens said.

“I truly believe that it’s time for us to pull our kids out of school. And I know people say, ‘Not all of us can afford to do that,’ but the country wasn’t built on people having a lot of money when they were homeschooling.”

Owens claimed that Democrats are trying to “guarantee that they have an ignorant group of people that vote based on emotion.”

By the way, if you have never seen Candace Owens famous takedown of the notion of white supremacists-under-every-bed before Rep. Jamie Raskin’s committee in 2019, check it out.

How about special awards for the young tough American women who are setting the Leftwingers’ hair on fire!

I nominate Candace Owens and Rep. Lauren Boebert for starters:

Colorado Congresswoman: Tear Down this Wall!