CBS, in a story yesterday, works hard to make sure the Biden/Harris administration is not to blame for the crisis on the border parroting Biden saying that it is all Trump’s fault.

The Administration, says CBS, sees it as simply a “formidable logistical challenge that can be solved by expanding bed capacity for the young migrants.”

If you watched Biden’s scripted, but still rambling, presser yesterday maybe this jumped out at you as it did me.

Although often losing his train of thought and reading from cue cards, he admitted that the “children”  flooding our southern border are mostly teens.  And, what he didn’t say is that they are mostly males.

I wondered if the open borders propagandists gasped at that admission since they want you to think of little adorable toddlers, not male teenagers that resemble an invading army.

See my post in late February where I showed data from the Office of Refugee Resettlement that confirms that the vast majority of the little darlings are 15, 16, and 17-years-old (72 percent) and that 68% are males.***

I bet most of the supposed 17-year-olds are actually much older.

What happens when they age-out?

Everyone is fretting about where the mostly male teenagers will be housed right now, but my major concern is what happens to them as they are distributed across America and turn 18 next year or in the following year or two as few, if any, will be granted asylum.

(I explained, here at RRW, that most have no legitimate claim to asylum and refugee status.)

Guess what!  They are not removed from the country!

Why are there never any questions about that?

Here is the CBS story (with no mention of Biden’s “mostly teenagers” slip-up) and as you read about these new facilities and the new 16,000 ‘children’ (nearly 12,000 of those are over 15-years-old) know that you are paying for all of this—both financially and as a society for years to come.

By repurposing convention centers, camps for oil workers and military bases, the Biden administration has launched an unprecedented effort to open more than 16,000 emergency beds for migrant children in response to historic numbers of unaccompanied minors entering U.S. border custody. 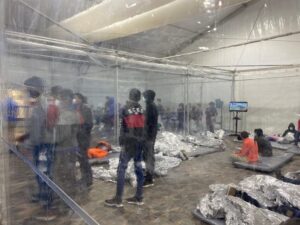 More than 16,500 unaccompanied migrant children were in federal custody as of early Wednesday. More than 11,500 of those children were being housed in shelters and emergency housing sites, while another 5,000 were stranded in overcrowded Border Patrol facilities, which the Biden administration has said are not appropriate for minors.

U.S. agents along the southern border are on track to apprehend more than 16,000 unaccompanied children in March, which would be an all-time high, according to an analysis of government records reviewed by CBS News. The previous record-high came in May 2019, when more than 11,000 unaccompanied minors entered U.S. custody along the southern border.

By the way, data at ORR shows that just over 15,000 were turned over to the agency in the Trump administration’s entire last year.

To respond to the unprecedented spike in arrivals of migrant children traveling without parents or legal guardians, the U.S. government is on track to open at least nine emergency housing facilities within President Biden’s first three months in office. The Trump administration operated three influx housing facilities over four years, and only one of them is currently active.

Your tax dollars pay for it, but Texans gets the brunt of the invasion….

The facilities the Biden administration has opened or plans to open include two convention centers in Dallas and San Diego, as well as an arena in San Antonio. A camp for oil workers in Midland, Texas, has been converted into a makeshift shelter, while another in west Texas is set to start receiving children in April.

On Wednesday, an emergency housing installation for up to 500 children was erected near Carrizo Springs, Texas, where a Trump-era influx facility was reopened last month.

The Pentagon also announced late Wednesday it will allow HHS to use a dormitory at Lackland Air Force Base in San Antonio and land at Fort Bliss in west Texas to house migrant children. The Lackland facility will be able to house 350 children, while Fort Bliss has capacity for up to 5,000, the administration told Congress on Thursday.

Peterson Air Force base in Colorado Springs, Colorado, is also being evaluated as a potential site to house migrant children, the Pentagon confirmed.

***In case you don’t want to bother going to the data at the Office of Refugee Resettlement here are a couple of tables showing the age and sex breakdown of the UACs in recent years.

We are now in FY21, but you can see that over time the data has been consistent and I expect it to be roughly the same this year.