If you haven’t already given up on Drudge, it is way past time.  A quick scan of the Drudge Report‘s headlines will make it clear that Matt Drudge has joined the never Trumpers.

“ATTENTION NEWS JUNKIES: We are the new Drudge!”

This week Revolver News, claiming to replace the increasingly liberal anti-Trump Drudge, is promoting an exposé on the Presidential Debate Commission by calling out its members’ bias. Hint! John McCain reaches back from the grave.

That story is here.

[They do have some competition from WhatfingerNews which was also created to replace Drudge!]

We featured Revolver News writer Darren Beattie here when we showed you a clip of his interview on Tucker Carlson about the “color revolution” (a coup) being deployed against the President.

Too funny!  Newsguard (the “Internet Trust Tool” Ha! Ha!) which is one more mechanism for big tech and the elite to censor the news you see has, not surprisingly, given Revolver a failing score in an effort to silence the news aggregation site.  Their explanation reads like a reason for you to follow the site!

Here is a screenshot of some stories Revolver is linking this morning. 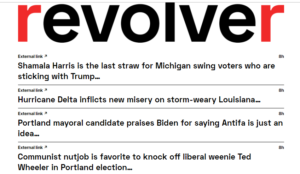 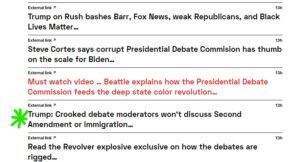 I am sure you have noticed that in the two debates so far there has been no mention of the Second Amendment and the right to bear arms, or immigration, both issues where the President has shown strong leadership.

Newsguard and the Leftwing controlled media are attempting to censor what you see and read.  Don’t let them.

Read at Revolver News, and at Whatfinger as well, as you ween yourself from a good portion of Fox News.   (If God forbid, Trump loses, I hope he creates a media outlet to compete with Fox!)