While we were busy trying to tolerate (I finally gave up watching) the contorted facial expressions of Democrat candidate Kamala Harris, a small city was once again under siege by Black Lives Matter/Antifa types who wanted a black officer lynched for “systemic racism” against a black teen who pulled a gun on him way back in February.

In Wauwatosa, Wisconsin the rioters did what they have been promising.  They went to the suburbs!

Here is the tweet that caught my attention this morning: 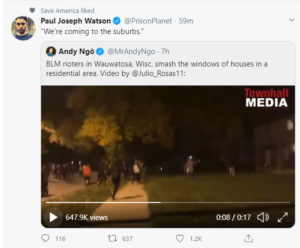 Townhall’s Julio Rosas was there filming  the attack on Wauwatosa’s residential neighborhoods.

(By the way, if you really want to get fresh news, and even if you don’t tweet, follow your favorites on twitter where the news comes unfiltered often from people right there on the ground.)

When I couldn’t find a satisfactory news account of the attack on the suburbs I went to my usual go-to, the UK Daily Mail:

And, when I couldn’t find a side by side image of the police officer and the teen who was killed, I knew I would find that at VDARE: 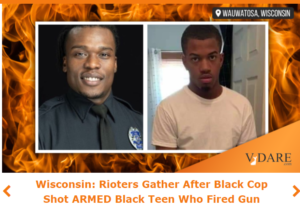 In fact, VDARE went even further and showed us a composite photo of the other criminals shot by this same ‘racist’ officer. 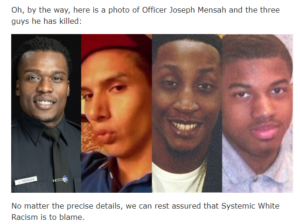 Coming to a town near you? Are you ready?

Why do Democrat women have to look so smug and sound so snarky?

I watched some of the debate last night between the calm and unflappable Vice President Mike Pence and Joe Biden’s running mate Senator Kamala Harris, but couldn’t bare it at about 30 minutes in, concluding that….

….I do not want to look at that smug face for 4 years!

It is the same gut reaction I had to Hillary’s face.

Clearly ‘the face’ got lots of reactions as The Hill reported in a story about it.

But, believe it or not, the Lefties loved it, saying her facial expressions were the best part of the debate for many. (I guess they didn’t have much else to be happy about.) 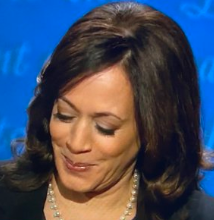 They  loved this look!

You know who else likely loved the giggly girl look—Putin and Xi Jinping.

The reaction on the Left to Kamala’s face makes it clear. There is never going to be a coming together, a reach across the aisle moment for America ever!

So, as Rush has said for years, they must be defeated.