“When Trump a few weeks ago began saying he wouldn’t commit to a peaceful transfer of power, that’s when I decided I needed to do it.”

Yes, this group of community organizers is planning to go to the streets at election time because they believe Trump will not leave office if he loses.  They think that Donald Trump is planning a coup.  Nevermind that Obama and his entire inner circle has been trying to illegally overthrow Trump for over four years.

They make it sound like they are going to bodily remove the President on November 4th, but no matter what happens, he is President until inauguration day in January (LOL! do they know that!).

This is a prime example of how the media (granted BuzzFeed “leans left”) carries the water for the Progressive Left and obviously is enjoying hyping the size of the Trump opposition.

The ‘star’ of this story is a humble former “public school teacher” who has been moved by the words of that meany in the White House to get politically active this year and has selected a group called Choose Democracy where she is putting in time as a volunteer (two hours a day!). 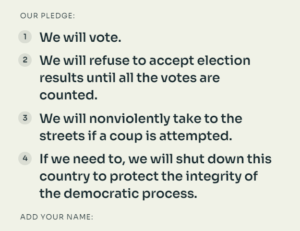 One day late last month, longtime activist George Lakey was yet again training people on how to peacefully resist a coup. But this time, he was not in Moscow or Bangkok or one of the many other far-off places where he has traveled over his 70-year career as a sociologist and writer promoting democracy and nonviolent forms of protest. He was in the United States, at his home in suburban Philadelphia.

On the other end of Lakey’s Zoom webinar were around 1,000 American voters — 500 more, he noted, than had shown up the week before — from around the country who were glued to their screens, taking careful notes.

As President Donald Trump has spent the last few months planting seeds of doubt about the integrity of the US’s electoral process and urging his supporters to “go into the polls and watch very carefully,” dozens of advocacy groups, mostly progressive, have been hard at work trying to organize and train everyday Americans for what to do if their democracy appears to fall apart before their eyes.

“When Trump a few weeks ago began saying he wouldn’t commit to a peaceful transfer of power, that’s when I decided I needed to do it,” said Lisa Graustein, a 45-year-old former public school teacher in Boston, of her decision to give up two hours of her day to partake in a training on the finer points of mass demonstrations, peaceful sit-ins, and putting public pressure on elected officials.

Graustein, who now runs a food distribution center [see packing Goya beans photo–must have been before Goya CEO came out for Trump!—ed], said she had been “semi active” in local political and activist causes in the past.

Still, that was a far cry from pondering the questions Lakey asked in the training, such as: Are you a person who will stand up to authority and be a voice for others? Or hearing Lakey assure the group that dictatorships fall when the masses rise up and that nonviolent resistance — like in Argentina in 1987 and the Soviet Union in 1991 — could be used to defeat a possible power grab by Trump.

But Graustein said she and all her friends and work colleagues are anxious about the election. “People not active in previous elections are active now,” she said. And so when someone in her Quaker community told her about the training, she signed up.

The idea behind the effort was to “actually help prevent” the possibility of a coup, explained Eileen Flanagan, who moderated the training with Lakey.

The training was organized by Choose Democracy, a Washington, DC–based group that describes itself as a “crew of organizers, activists, trainers, academics, and concerned citizens preparing for the scenario of a coup in 2020.”

So BuzzFeed reporter, Ukrainian-based Christopher Miller, wants you to believe that Lisa the food bank worker, just a typical American middle-aged woman, is motivated for the first time to go to the streets to throw ‘orange man’ from the White House.

But, hold on a second!

“Someone in her Quaker community” told her about Choose Democracy?  She didn’t know Daddy was its primary funder?

I checked Open Secrets on Choose Democracy and it seems that in mid September, someone with the same last name, Graustein, was the primary donor to the PAC Choose Democracy. 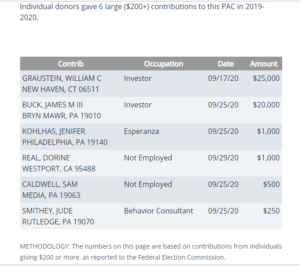 Check out the Graustein Memorial Fund (these family trusts are where wealthy people can legally park money and then direct it at their pet causes.)

It seems that the fund has taken a “new direction” over the years helped along by William’s daughter Lisa.  See here.

Here is Lisa’s bio.  Oh, and her teaching job was at a public charter school, not at a “public school” in the traditional sense.

Lisa is a public school teacher, gay rights activist, artist, and member of our Board of Trustees. She is a facilitator with Beyond Diversity 101, which offers workshops that expose, stimulate and transform the dynamics of diversity at the root level. Learn more about BD101 here.

Check out Lisa’s presentation, From Genocide to Generational Continuity: Frames for Understanding and Transforming Education,on how the process of genocide – actual and symbolic – is woven into the fabric of our nation’s key institutions, including our education system. [Link appears to be dead!—ed]

It seems pretty clear that Ms. Graustein is not a newbie to political agitation.

After all, she is a Quaker.

Most Americans don’t know that the ‘Friends’ (aka Quakers) are an extreme leftwing political group.

I wrote about them at RRW and elsewhere over the years because they have worked closely with pro-Palestinian and Islamic supremacist groups.

You will see at the Wall Street Journal that they are aggressively anti-Israel.

Be sure to read more of the BuzzFeed story that never mention’s Lisa Graustein’s connection to the source of money that is going to organizing spearheaded by an infamous community organizer, George Lakey.

I see at Open Secrets that Choose Democracy had not spent any of the Graustein’s money, or anyone else’s, through the end of September, so this PAC isn’t contributing to the Biden campaign, or any other campaign it seems.

Makes me wonder if they are saving their bucks for street action—hiring agitators, covering their expenses, and buying ‘supplies’ as they plan to storm Washington, DC. and the Trump White House.

Don’t miss my post yesterday on Leo Hohmann’s post in which he directs our attention to Shutdown DC.