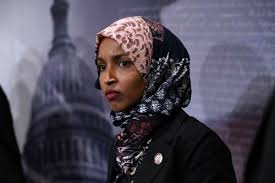 14 thoughts on “Feds Will Not Bring Charges Against Rep. Ilhan Omar for Marriage/Immigration Fraud”