Remember the story from April.  I posted it here.

NJ: Muslim Candidate for Congress Says She is Getting Death Threats

In another in my series of posts I’m calling ‘Down the Memory Hole’—forgotten because the media doesn’t really want to report anything that doesn’t fit their ‘world view,’ I wondered whatever happened to Congressional candidate Amani al-Khatahtbeh.

Back in April she complained that someone called her home with a message:

On the evening of April 21, Al-Khatahtbeh reportedly received a phone call from an unknown number threatening to kill her and her family. She received the threat shortly after a virtual town hall she hosted on Instagram.

The caller said in part: “Your parents live at [address]. I will f**king kill them and. . .I will torture them and feed them bacon and f**king pork…As soon as you get off the phone, I’ll f**king go to his house…“Ni**er, you’re Muslim, you f**king ugly Arab Muslim. You terrorist.”

Not only did CAIR jump on the bandwagon with its Islamophobe dog whistle but she garnered the support of dozens of prominent women who came to her defense.

Whatever the truth is about the death threats, it didn’t help her win the primary election where she received only 2.8% of the vote.

Yesterday I went to see if I could find out whether the perpetrator of the death threats had been identified and guess what I found—NOTHING!

Not a mention that I could find about whether there was even any investigation of the allegations.  But you see it almost doesn’t matter if the call even happened because it was planted in the minds of those following the story that there was such a despicable person (and he surely must be a redneck Trumpster!).

Maybe I didn’t look hard enough, maybe you can find the truth about whether hers is another hate crime hoax, but in the meantime down the memory hole it goes…..

See the previous two posts in my new category—‘Down the Memory Hole!’

This is some news you surely already know—teenager Nicholas Sandmann awarded big bucks from legacy media outlets who defamed and vilified him without the facts in that incident in Washington, DC following a prolife march in January 2019.

To the media losers, Sandmann, with his pleasant smile and Trump hat, represented the perfect punching bag for the release of their hatred toward America firsters.  The last laugh is Sandmann’s (for now)! 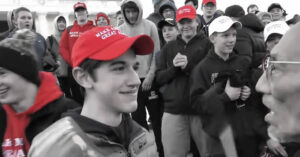 I’m posting this story not so much to give you the news of Sandmann’s victory that you likely already knew, but to post the warning writer, John Zmirak, pens at the end of his story on the stunning slapdown of the Washington Post (and others).

From The Stream (hat tip: Meanymom):

Nick Sandmann Wasn’t Supposed to Survive. He Was Meant to End Up Like Mike Adams.

Nick Sandmann just turned 18 years old. And he’s settling a $250 million lawsuit with major media outlets that libeled him. Let’s send him our congratulations and prayers.

I was prepping Robert Oscar Lopez’s powerful piece on Mike Adams for publication when I realized something chilling. Reading how the left hounded that talented writer to suicide (if indeed he wasn’t murdered) I heard in my head the media headline that never ran. Thanks be to God.

That’s what the media mob wanted. They as good as admitted it.

When Sandmann’s own Catholic bishop threw him to the wolves, when his school suspended him, when “conservative” columnists at National Review and other venues denounced him as “bigoted,” they were writing him off for life. They were branding him on his face with the most destructive charge available in America. The charge that’s now burning cities and getting Trump supporters murdered.

They’re Coming for Us

That’s where we stand in 2020, as leftists verbally tap dance on Mike Adams’ coffin. I wish Mr. Sandmann well, and advise him to take his money and move somewhere sane, like Poland. Maybe start a Catholic college there. Because the kind of leftists who dug up Adams’ columns from 20 years ago to goad him to his grave aren’t finished with Nick Sandmann. They can’t forgive his innocence, his victory, or his smile.

Get yourself to the gun range. Make friends there. Organize local militias, to step in when the police (afraid for their pensions) meekly disband. We don’t need two Americans like the McCloskeys in St. Louis, but two million or ten million. That’s the only way this madness ends.

Reminder!  How is your prepping going?