He surely is not a lone wolf, but is the first evidence of Antifa’s evil plans to lure angry Trump patriots to state capitals in the coming days so they can begin the revolution.

Remember Antifa/BLM/Insurgence USA are all revolutionaries. They don’t give a rat’s you-know-what about Biden or Harris, it is revolution they want.

As I said last night, stay away!  The events at the US Capitol were a trap, don’t be so dumb and let them do it again. 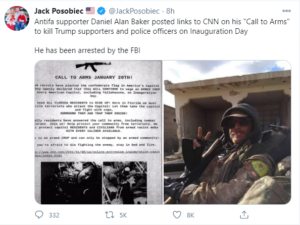 He trained in Syria in 2017 with the YPG, was featured on VICE, and in 2020 participated in the CHAZ insurrection in Seattle, per DOJ documents.

Here is Baker’s call to arms:

See the Justice Department Press Release which specifically says his target was the Florida Capitol at Tallahassee:

In case you wondered, I am still on Twitter and so are some great people who are able to spread the news widely there until others, notably Parler and Gab, are fully operational.

Today I realized I needed to get screenshots of tweets like those above from the indomitable Jack Posobiac because they could be taken down at any moment and my imbedded tweets would disappear.

I have also posted some of my posts from Frauds and Crooks to my facebook page for Refugee Resettlement Watch where I am reaching about 46,000 people.  You can see it there (until it gets removed).