Because Mike Lindell, the My Pillow Guy, a strong Christian has supported the President, the Left, the Cancel Culture, is trying to destroy his business.

From the Seattle Times:

My Pillow CEO says Bed Bath & Beyond, Kohl’s, Wayfair are dropping his products

WASHINGTON – My Pillow chief executive Mike Lindell – an avid President Donald Trump backer who has repeatedly pressed claims the 2020 election was rigged – said Kohl’s, Bed Bath & Beyond, Wayfair and other retailers are dropping his products.

There is more, but don’t bother even reading it.

See Right Side Broadcasting Network’s interview with Lindell, here at Youtube (while it lasts).

My Pillow is under attack by cancel culture. The bots are busy getting My Pillow removed from retailers nationwide.

Go to http://mypillow.com and use offer code “RSBN” to support both My Pillow and RSBN- plus save up to 66%! We will NEVER surrender to cancel culture!

Oh, and add Wayfair, Kohl’s, and Bed, Bath & Beyond to your list of companies you will no longer patronize as you peacefully protest with your wallet.

I am heading right over now to shop at My Pillow.com.  We got a great dog bed there a few months ago!

This post is filed in my new ‘Fight Back’ category.  The peaceniks of the Left are trying to cancel the word “fight” if you haven’t heard! 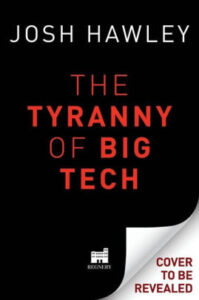 As you probably know Simon und Schuster backed out of their contract to publish Senator Josh Hawley’s book about the Tyranny of Big Tech after he stood up for our President.

So yesterday we learned from Mollie Hemingway at The Federalist that Regnery would publish the book in the spring.

Read Hemingway’s report on how Hawley (in addition to Senator Ted Cruz) have become top targets of the maniacs on the Left.

You can pre-order his book at Barnes & Noble.

Buy a copy, or two, or three to show Hawley you appreciate his bravery. (The website opened slowly for me, so be patient.  I am guessing it is because of a rush of orders.)

By the way, I checked to see if there was any pre-order at Amazon (yes! I am quitting Amazon, just wanted to check).

And, the only thing I saw about Hawley there for purchase was a coffee mug for $39.

In case you can’t read it, it says: JOSH HAWLEY SUCKS.

Just shows Amazon for what it is!

By the way, since we are told by the speech police that the word “fight” is now verboten, I’ve created a new category here, beginning with this post, that I am calling: Fight Back!

P.S. I am going to be busy at RRW going forward…..

Just a quick note to let you know that I am picking up my posting at Refugee Resettlement Watch as Biden/Harris are promising 125,000 refugees will be admitted to the US this year.

And, that number does not include the number of wannabe asylees headed to the southern border at this moment!

Longtime readers know that I first began writing about the refugee resettlement industry in 2007.  I have archived 9,577 posts there. And, unfortunately we are back to square-one after a brief period of hope that the refugee admissions program might be scraped or at least reformed.

Our President Trump kept the numbers of third worlders low for the last few years, and especially low since the Chinese virus crisis began, but all that will change now.

If you are looking for the latest news on the crisis in Washington, I recommend Gateway Pundit, Conservative Treehouse (aka The Last Refuge) and JusttheNews.  I am sure there are others, but those sites come immediately to mind and will keep you fully informed.

I’m not going away, just gotta get caught up at RRW!