I have already heard from some of my faithful readers wanting to know what happened in our once beautiful capital city***.

This will be a short report today because I would like to see more facts about what really went down at the Capitol.

I spent the morning near the White House waiting with hundreds of thousands of peaceful patriots to hear the President speak.

Here is a screenshot of where I was. This view is what the President could see.  But, even this photo taken at 8:35 a.m. does not begin to show how massive the protest gathering was, especially when the President took the stage hours later.

President Trump was scheduled for eleven, but didn’t speak until noon.

Although the temperature was in the moderate low 40’s, most everyone appeared to be pretty darn cold as they waited for many hours in an absolute stunning sea of flags and banners of all sorts.

When the President finished, most of this massive crowd began moving toward the Capitol building where some Members of the House and Senate were attempting to present a case that the election might(!) have been a fraud.

I was not at the Capitol, but like you, saw the images on TV after getting home. 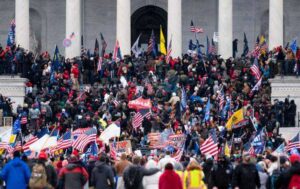 I’ll show you more pictures as the days go on, but here are a few that I took while mingling around a crowd that was largely working class Americans of all ages. The “deplorables” according to the elitists in the Democrat Party.

You will see that I was most interested in the Chinese-American presence (Vietnamese-Americans who have first hand experience with Communism were also out) showing their support for this President, the only hope they see to keep the Chinese Communist Party from gaining a greater foothold in America. 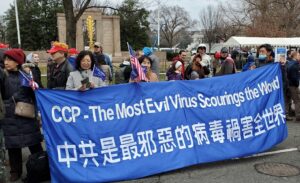 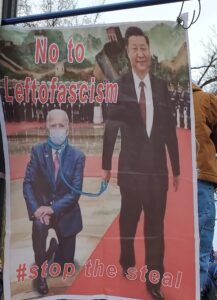 As for what happened in the afternoon at the Capitol building at the other end of Pennsylvania Avenue, we need to wait until there is more information.

Of course none of us condone violence of any sort, but if it turns out that Trump supporters are largely responsible, I ask the ruling class WHAT DID YOU EXPECT?  when on both sides of the elite political aisle, these Americans who love Trump have been disrespected while they watched as our weak leaders failed to criticize the violence for most of last year perpetrated by the Leftists—Antifa and Black Lives Matter.

And, the final insult to them, to the country class, was the great Election Steal of 2020 which unseated the one political leader they see as truly liking them and caring about them as he puts America first!

*** When I say once beautiful city, I am referring to the Washington, DC where I lived in my late 20s and where I took my children for field trips and trips to the Kennedy Center where a homeless encampment is within view of it now and where store fronts are boarded up.

My friends and I remarked that we may never be back.  Yesterday might have been our last site of it.

P.S. It sure looks like I will be busy writing at Refugee Resettlement Watch going forward.