I know, I know, there is so much that needs to be said about Washington, DC on January 6th, 2021, that I don’t know where to begin.  Like you, I have been reading as much as I can.

On a serious note, I recommend my friend Leo Hohmann’s piece yesterday, as I am seeing everywhere, January 6th may indeed be the day the Republican Party died:

January 6, 2021: The day our faith [in Republicanism] was breached

And, James O’Keefe had some words of wisdom that hopefully address the deep sadness many of us feel:

So what do we do now? By James O’Keefe

I know this tweet (below) isn’t funny, but it made me laugh out loud and speaks volumes about the failure of our stuffed-shirt so-called leaders’ failure to secure the Capitol.

Heads are already rolling as we learned late yesterday that the chiefs of security and police at the Capitol are resigning or being fired.

As they all (Nancy, Mitch and our brave leaders) scurried into hiding….

Update!  In another move to censor, it appears that Twitter isn’t letting the photo appear now.  So here it is again: 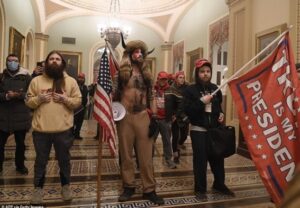 We spend $750 billion annually on "defense" and the center of American government fell in two hours to the duck dynasty and the guy in the chewbacca bikini pic.twitter.com/ZMR76cbN2c

We will be eagerly looking for the thorough investigation into who was responsible for this catastrophic security failure, but I suspect the media will spend most of its time trying to identify the Trump supporters who took the Capitol building.

I am guessing there were some Leftist agitators among them, but we also have to anticipate that many of those who swarmed through the building are in fact Trump loyalists.  The Left has an extreme fringe, but frankly so does the Right.

As I mentioned briefly yesterday, there were hundreds of thousands of decent peaceful patriotic Americans stretched the full length of Washington—from the White House to the Capitol building—but these few will be the face of the MAGA movement in the mainstream media likely forever.  So get used to it and don’t give up on America First!

I’m trying to look at this from the standpoint of the law breakers. These people have had it with the media and mealy-mouthed politicians especially those supposedly on their side in the Republican Party.  They have been demeaned for years, cooped up by COVID and knew that a bunch of politicians spouting hot air on the House and Senate floors was going to go nowhere to show the world the dreadful unfairness of the 2020 Election Steal.

Those breaking the law to storm the Capitol included Ashli Babbitt who lost her life that day.

Was it all planned in advance by dark forces on one side or the other, hopefully we will find out someday.

In the meantime, it appears that the Horned man in a photo which will be seen in history books for generations is being widely identified as Jake Angeli, a Trump supporter and QAnon promoter.

Search his name and you will find dozens of stories about him.  Here is just one.  I have to admit that I never really understood what QAnon is….

Jake Angeli, a well-known QAnon influencer known as the “Q Shaman,” was a central figure in the siege on the Capitol yesterday, making his way into memes and photos with his conspicuous horned helmet.

Angeli took photos behind the Senate dais and was seen walking around the Capitol building with a bullhorn, wearing his signature hat and red, white and blue face paint.

He has also held a leading role at far-right rallies in Phoenix, Arizona, according to The Arizona Republic. He told the newspaper that QAnon validated beliefs he has held since about 2016.

There is much more, keep reading.  As for his ‘acting’ career, that is discussed here as well.

I know, this could all be b.s. too, but many news outlets are reporting that he was at pro-Trump events in the past.

The shot heard around the world…

I should be condemning all of what happened at the siege of the Capitol on January 6, 2021, but somehow I can’t and I keep thinking of Lexington and Concord and whether those, now celebrated patriots who were looked upon as a bunch of ragtag misfit militiamen at the time, are not so different from the country class members of MAGA we saw running through the marbled halls where only important ruling class people are ever permitted to be.

People can only take so much and they clearly see that even their right to a fair election has been taken from them.