I don’t know, and I can’t even guess.

From what I am hearing, the number of American Patriots who descend on Washington, DC is going to be a magnitude beyond anything the Tea Party of old ever mustered.

Indeed in those days our opposition to expanding government and its voracious appetite for our money stirred anger, but in our lifetimes there has never been anything like what we see now—the enemy is clear and here (not in some foreign land), they are willing to do anything for power and it appears that foreign governments, especially the Chinese Communist Party are backing them.

Will the incredible show of  peaceful force I expect on January 6th amount to anything significant? Time will tell and predictions abound. 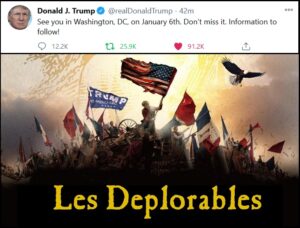 This morning I started my usual perusal of sites I read on a somewhat regular basis and first read my friend Richard’s Blue Ridge Forum where he harkened back to a Conservative Tree House post of last week where blogger Sundance quoted Solzhenitsyn in a post featuring a tweet from the President (above):

“And how we burned in the camps later, thinking: What would things have been like if every Security operative, when he went out at night to make an arrest, had been uncertain whether he would return alive and had to say good-bye to his family?

Or if, during periods of mass arrests, as for example in Leningrad, when they arrested a quarter of the entire city, people had not simply sat there in their lairs, paling with terror at every bang of the downstairs door and at every step on the staircase, but had understood they had nothing left to lose and had boldly set up in the downstairs hall an ambush of half a dozen people with axes, hammers, pokers, or whatever else was at hand?…

[…]  If…if… We didn’t love freedom enough. And even more – we had no awareness of the real situation…. We purely and simply deserved everything that happened afterward.”

― Aleksandr I. Solzhenitsyn , The Gulag Archipelago

A few days ago, Ned May at Gates of Vienna blog posted this (below) emphasizing that “deplorables” can no longer even count on some so-called “conservative” leaders and websites to stand up to the Democrat/Communists’ machine.  They are too worried about maintaining a respectable image, he says.

Here we are facing a possible civil war and they have already begun speculating about Presidential candidates for 2024!

I know Ned May and so when he writes critically about a here-to-fore reliably conservative website, PowerLine blog, I believe him.

Doubling Down on Deplorable

No, it’s better to pretend that conservatives can somehow manage to prevent the worst forms of electoral fraud in the future. They’re already gaming out strategies for the midterms in 2022, and thinking about Republican prospects in the 2024 presidential contest. As if future elections had any real meaning. As if Republicans differed in any fundamental ways from Democrats.

And maybe they’re right. Maybe the deplorables who descend on Washington D.C. next week will have no lasting effect. Maybe the new socialist regime will only be temporary, and Republicans will get another chance to pretend to be conservative in Congress and the White House. Maybe the earnest foreign policy wonks of the Right will get their hands on the levers of the military-industrial complex and initiate new military interventions to bring democracy to Berserkistan or engage in nation-building in Gondwanaland.

But my intuition tells me that the country has been irretrievably changed, and not for the better. The gossamer fabric of the old political system will most likely be twitched aside soon by the Fickle Pinky of Fate.

For that reason, I tend to hang out more and more at WRSA these days. They’re so far beyond the pale that they don’t even register on the National Deplorometer.

This time it will be a real civil war.

Or maybe not. Maybe the Power Line boys are right, and all this will blow over. Maybe people will put on their masks, get vaccinated, and plop themselves back in front of the TV, where they belong.

Survivalists are speculating too!

My other stop this morning was at one of my favorite prepper sites—prepping being a hobby! I picked up over the summer.

After quoting from a post at American Thinker about what will happen in the halls of Congress on the 6th while hundreds of thousands of patriots gather outside:

“V.P. Pence will have to decide how he will handle the situation when two sealed envelopes are handed to him from any of those states.”

That moment, on that day, will be pivotal in United States history.

Will Pence cave to the establishment and hand the keys of the White House over to the CCP? Or will he do the hard thing, the right thing?

Jorgustin predicts Pence and the Congress will cave and goes on….

The Holding Pattern – The Wait – Will Be Over

Here’s the thrust of my post today… Everyone has been in a holding pattern. Waiting. This is especially true of American patriots / comprised within the 74 – 80 million people who voted for ‘America First’. The powder has been kept dry, so to speak, as the contested “processes” have made their way through the (corrupt?) systems(s) of (corrupt?) politics and (some corrupt?) courts. Waiting…

The purpose here is not to rehash all of that (we’ve done it plenty already). Rather, to point out a date, a time-frame, and when this may finally erupt into kinetic energy.

So logic leads me to believe that assuming Pence rolls over, one of two things are going to happen.

2. Patriots know that this is it. The end game. They are backed into a corner and decide to defend the Constitution in ways that go kinetic.

Critical time frame according to Jorgustin …. 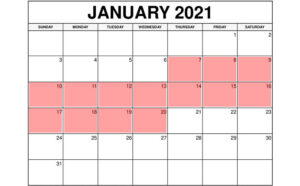 Don’t stop reading!   Read it all.

See what the possibilities are, forget about being considered moderate and respectable and be ready both mentally and physically.

We are at a critical juncture in American history and there is no downside to being ready to both protect your loved ones, and to do whatever you are called to do to save the Constitution and this great country. .

Remember those who did it before for you.