We told you the other day that the cancel-culture was busy at work and had pressured major retailers to drop My Pillow from its shelves because of Mike Lindell’s support of President Donald Trump.

This is the kind of peaceful protest we all need to be doing more of!

Patriots Rally in Florida for My Pillow

Karyn Turk reports live from the rally to support My Pillow in Boca Raton, Florida where patriots are standing up against Big Tech oligarchs and the left who are trying to cancel Americans.

Turk says the key is for patriotic Americans to unite together. “The left does a very good job of sticking together, we as conservatives need to do the same…and say we’re not going to tolerate this.”

Mike Lindell’s completely American-made business is under attack from the left since he has been an outspoken voice against the fraud that occurred on Nov. 3. Big Tech tyranny has led to My Pillow being dropped from Bed Bath and Beyond, Wayfair, Kohl’s, and Kroger. [Kroger is new to the list since I reported on the mean trick being done to Lindell–ed]

The War Room has contact phone numbers, so go get ’em.

Here is what I did today.  I took one of the many 20%-off flyers I get from Bed, Bath and Beyond and sent it back to the company with a note—told them I will never shop there again because of their political views and what they did to Lindell.

By the way, I put my post the other day on my Refugee Resettlement Facebook page and got a great response.  See it here.  (And, I don’t monitor comments there, so join in!). 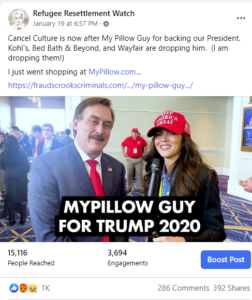