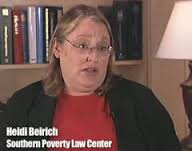 2 thoughts on “Chief Hate-Monger at SPLC is out!”