Update:  This is what you see if you go to my Twitter account (I can’t see it, but you can).  “Unusual activity!”  Yes, from Twitter as they drive conservatives from their platform. 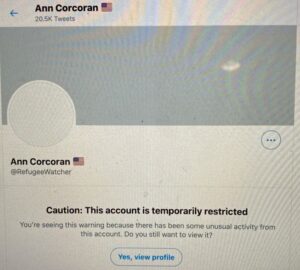 It was just a matter of time…

I have been on Twitter for years and years and had at one point 16,000 followers (small by Twitter standards). They know I am not a robot.

But this is how they are going to do it.

They aren’t going to outright ban voices like mine, they are doing this:

I am on Gab, but have barely gotten started there:

By the way, my Refugee Resettlement page at Facebook (which I had been remiss in keeping up for months) had a reach of 98,000 in the last month as I resumed posting there.  Visit while it lasts!