“I promise my fellow Texans and Americans that I will fight against the many unconstitutional and illegal actions that the new administration will take, challenge federal overreach that infringes on Texans’ rights, and serve as a major check against the administration’s lawlessness.”

Do you remember how the Socialist Democrats at places like the ACLU and the Hebrew Immigrant Aid Society et al stopped most of Trump’s efforts to reform immigration and the Refugee Resettlement process (to keep us safe!) and Trump was sued in virtually every effort.

Let’s hope this is the beginning of a trend!

From the Austin-American Statesman:

A federal judge on Tuesday temporarily barred the U.S. government from enforcing a 100-day deportation moratorium, an immigration priority of President Joe Biden. 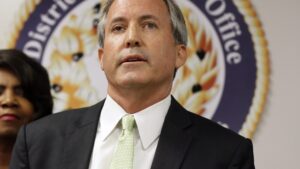 Texas Attorney General Ken Paxton on Friday had asked U.S. District Judge Drew Tipton, a nominee of former President Donald Trump who took the bench in Corpus Christi last June, to block the Biden administration’s new policy that pauses most deportations for the next 100 days.

“Texas is the FIRST state in the nation to bring a lawsuit against the Biden Admin,” Paxton, a conservative Republican, wrote on Twitter. “AND WE WON. Within 6 days of Biden’s inauguration, Texas has HALTED his illegal deportation freeze. *This* was a seditious left-wing insurrection. And my team and I stopped it.”

….Tipton said the Biden administration and key federal agencies that deal with immigration “do not have discretion to completely disregard” federal code that says “when an alien is ordered removed, the Attorney General shall remove the alien from the United States within a period of 90 days.”

The case appears poised to make its way to the federal appeals courts quickly.

Just so you know, the open borders agitators were pretty ticked-off at the Trump Administration as it got so many illegals/criminals deported in its final days, including on these flights to Africa.

To the Socialist Dems, they are all “asylum seekers” rather than criminals…. 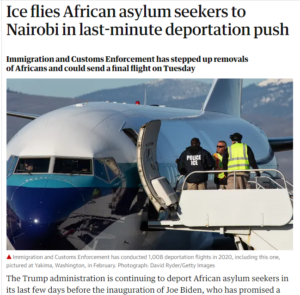