If you are like me, you have been playing out various scenarios in your mind about where this week, this month, this year will lead us and what you might have to face.

Hohmann lays out various paths for our future and none are very encouraging because we can never go back to a pre-COVID, pre-Election Steal life.

I want you to read the whole thing, but one suggestion in particular resonates with me because I haven’t done it and know I must. How about you?

Who will you trust when law and order break down and the bullets start flying?

We must work together and help each other like never before.

If you haven’t already done it, it’s time to have a serious conversation with neighbors to find out who will be on your side and who will be fighting with antifa, BLM and possibly foreign troops invited onto U.S. soil under the auspices of the United Nations.

Perhaps God will give a reprieve and the scenario I have laid out will not come to pass. But even if that’s the case, a house divided cannot stand, and America is hopelessly divided. Don’t let your normalcy bias get in the way of you being prepared.

The signs have for decades been pointing to an epic clash of worldviews, between those who believe society functions best when traditional Judeo-Christian virtues are rewarded and encouraged and those who believe that free people cannot be trusted and society must be micro-managed by an all-powerful secular state.

Over the last 10 months it has become obvious to even many of the politically unengaged that things aren’t going back to normal. Not on Jan. 6, not on Jan. 20, not a year from now.

We must plan to do this ourselves. Don’t hesitate to help a fellow patriot in need, to share information with trusted like-minded thinkers.

Always plan as though we are going to be left to fend for ourselves. We are the leaders of our own families, neighborhoods, communities and cities. If Trump steps up, consider it a bonus.

I expect many of us are not eager to begin discussions with neighbors about what might be happening for fear of looking like conspiracy crazy people, but history is littered with tragic stories about those who did not speak up in time for a whole host of reasons and people died.

So, be brave, begin having those conversations!  You might find they are thinking the same thing, but were afraid of being labelled conspiracy nuts too!

Yesterday I told you that twelve brave Senators will stand against China Mitch McConnell and his deputy John Thune and said they want a Constitutionally permitted review and debate on the election results in key battleground states before they vote to certify the 2020 election and install Harris/Biden in the White House.

Late yesterday both Senator Lindsey Graham of South Carolina (so glad I didn’t send him a dime as he cried in TV ads every day to send him money so he could get back to the Senate) called the effort a “political stunt,” and Senator Tom Cotton of Arkansas said it would “establish unwise precedents.”

It strikes me that it is the Dems who have established unwise precedents with the election process in at least five major Democrat run cities.

Here is Newsweek on Graham (who never did get to the bottom of the DOJ’s role in the Russia Hoax as he promised he would): 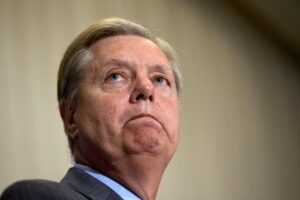 A coalition of 11 Republican senators and senators-elect promised to oppose Congress in certifying the Electoral College vote this Wednesday, unless a commission is formed to audit the election results in disputed states. The group, led by Ted Cruz of Texas, said it would “reject the electors from disputed states as not ‘regularly given’ and ‘lawfully certified’… unless and until that emergency 10-day audit is completed.”

Graham, a Republican who represents South Carolina, criticized the effort as a political stunt on Sunday.

“Proposing a commission at this late date—which has zero chance of becoming reality—is not effectively fighting for President Trump,” he tweeted. “It appears to be more of a political dodge than an effective remedy.”

Needless to say, America Firsters gave Graham a piece of their mind:

“So you used MAGA to get re-elected and now do this? Disgusting,” tweeted Errol Webber, a Republican candidate for governor of California.

As for Tom Cotton, I did like the guy, but I am now done with him.

Sen. Tom Cotton (R-Ark.), a possible contender for the GOP presidential nomination in 2024, broke with his rivals Sunday night by announcing he will not object to the counting of electoral votes on Jan. 6.

While Cotton said he is concerned about how the 2020 presidential election was carried out, such as changes to election law allowing mail-in ballots arriving after Election Day to be counted, he argued it is up to the states and the courts — not Congress — to handle election laws.

We all know that the chance of the Brave Twelve succeeding in keeping Biden from being installed in the White House are almost nil, but what the Twelve are doing is simply saying the facts need to be aired and discussed before a vote is taken and the Constitution anticipated such a situation.

And, they are providing us with a very useful list of wimps.

So to wrap up we know that China Mitch has Republican Senators Thune of SD, Murkowski of Alaska, Romney of Utah, Toomey of Pennsylvania, never-Trumper Ben Sasse of Nebraska and now Cotton of Arkansas, and Lindsey Graham of South Carolina on his team to shutting the door to any more debate on the great Election Steal of 2020.

As I said yesterday, Ted Cruz of Texas and Josh Hawley of Missouri will lead a team that wants answers to what happened in key states when the vote count was stopped overnight beginning on November 3rd.

Reminder that if you are going to DC on Wednesday, check out Stop the Steal’s website!

While you are visiting Stop the Steal, see where you can find out how to reach your Members of Congress and Senators.  Call them today through Wednesday!  Tell them what you think!