Update:  Sullivan’s brother turned him in, says he was in charge of the Capitol riot at Gateway Pundit.

I had planned to write at Refugee Resettlement Watch today, but it can wait.

There is simply too much news coming at us on investigations surrounding the storming of the Capitol apparently led by an organized Antifa/BLM contingent.

Last night I told you about the charges filed against John Earle Sullivan. Read the Justice Department Affidavit supporting the charges against him.

John Sullivan was not acting alone.

First have a good laugh about the meme making its way around social media. Keep it going because humor is a peaceful political weapon.

I think Sullivan should be charged as an accessory to murder as he was egging on those breaking through a Capitol door that resulted in the murder of Ashli Babbitt.

(I am not excusing the legitimate Trump supporters who followed instructions from Sullivan and other evil people and entered the Capitol, that was dumb and wrong.)

Watch this and cry…..

(If it disappears from Youtube, go to Gateway Pundit where hopefully it has been preserved.)

This is Sullivan’s own video!  He even brags about shopping for his Trump hat!

Think about!  This punk is responsible for the second Impeachment vote against President Trump. The shameful Members of Congress (including ten Republicans) couldn’t wait for the truth to be revealed.

So what have they accomplished? They have made Trump supporters even more angry and determined to never forget!

We expected it from the Democrats, but here are the Ten Republicans who rushed to judgement: 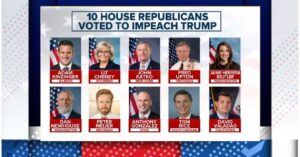 Be sure to see what the Wyoming Republican Party has to say about Liz Cheney!

A few months ago I made a special category for Political rats. Just saying!

All of my posts on the events that began on a cheerful patriotic note on January 6th are tagged January 6th 2021, beginning with my first post about what I saw at the Ellipse that morning.

9 thoughts on “Laugh and Cry: John Earle Sullivan Should Be in Federal Prison for Life!”