When I saw the news the other day about 350 illegal aliens, mostly from the DR Congo, arriving at our southern border and being sent to San Antonio by border patrol I was steamed to say the least!


What the h***!  We have admitted over 50,000 ‘refugees’ from the DR Congo since fiscal year 2015 (not quite 5 years).
50,314 to be exact as of today!
Yet we are expected to welcome hundreds more coming in illegally.
And, by the way, who funded these ‘impoverished’ people to make the long journey from Central Africa? Does anyone in authority ever ask that question?
Before I get to the maddening news and give you some background on why they are now being shipped to “welcoming” Maine, below is a map of where the 50,314 have been placed in less than 5 years.  I will bet most of you never had a clue this was happening.
And, if you missed it, the DR Congo is Ebola central in Africa these days!

I wrote about the Congolese migration to your towns and cities extensively at Refugee Resettlement Watch—a migration that Obama and the UN kicked off and that the Trump Administration continues!
I reported last month here at ‘Frauds and Crooks’ that nearly 8,000 from the DR Congo have arrived (as legal refugees) in America in under 8 months in this fiscal year!
When is enough, enough?

This is a map from the US State Department’s Refugee Processing Center.
Numbers are hard to read, but know that Texas, Arizona, Kentucky, North Carolina and New York are the top five states building Congolese ‘communities.’
Does anyone think that any of these ‘new Americans’ will vote for anyone other than socialist candidates?
When are the dumb Republicans going to get it—when they lose Texas (the number one state for all refugee resettlement) they lose the White House. 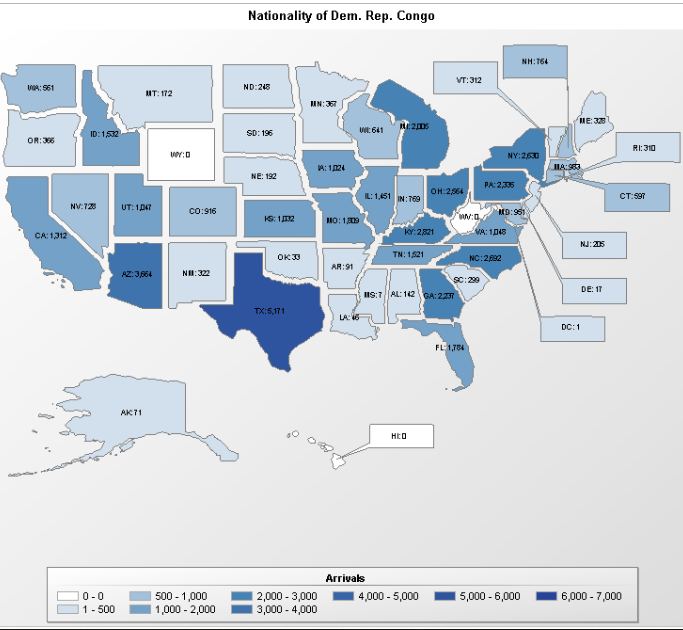 Now what about this secondary migration to Maine!

Laura Ingraham did a report on San Antonio seeking to send their new arrivals to Maine, see here.
Turns out that after getting the first couple of batches, Portland, Maine elected officials started to get cold feet and asked San Antonio to not send more.  See that story here.
So, why Maine?
It’s the welfare magnet stupid!  I’ve been writing about Maine’s generous welfare for migrants of all stripes (not just legal Somali refugees which started the African flood to the state), so the word went out that asylum seekers could get welfare there too!
(See many posts on Maine and welfare for migrants, here at RRW.)
Here is the key to Maine as a magnet!
It is well known around the world as a state that gives welfare benefits to asylum seekers.  In most of America, asylum seekers (those not granted refugee status yet!) are not permitted to receive welfare!  (I suspect many are still getting benefits, but it’s not supposed to be happening.)
The illegal aliens can get taxpayer-funded goodies in Maine, and despite the best efforts of Maine’s previous Republican governor the handout continues.
Don’t miss my post yesterday about how the vast majority of asylum seekers never show up for their court dates.  Why bother when they can stay comfortably cared for and protected in Maine!
One last thought:  Since Catholic Charities is responsible for federal refugee resettlement in Maine, I suspect they are called upon to help move some of the migrants (aka ‘new Americans’) from Texas to Portland (but surely use taxpayer dollars for their supposed Christian charity).

20 thoughts on “Hundreds of Congolese Asylum Seekers Arrive in Texas, Some Shipped to Maine”