As many of you know, I wrote the blog Refugee Resettlement Watch for eleven years beginning in July of 2007. My goal was to educate Americans about the US Refugee Admissions Program and related refugee issues here and around the world. 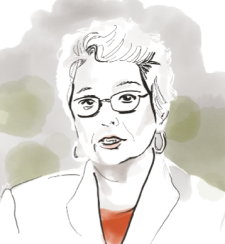 I wanted to see the USRAP reformed, and although President Donald Trump has slowed the flow of refugees into the US, it is not enough.

I could be wrong, but I don’t see the major reform I believe is needed happening as the Democrats now control the House of Representatives.

Beating my head against a wall for two more years strikes me as nuts!
So, I’m doing what I threatened over the years and am writing a blog about frauds and crooks.

Update:  Over the summer the speech police removed Refugee Resettlement Watch, but it has since been reconstructed, here.  I’m writing there regularly now along with ‘Frauds and Crooks’ primarily because I couldn’t let them win.

My inspiration and purpose at ‘Frauds and Crooks’ is to balance news like this news from Columbus, Ohio about a Left-wing film company planning a ‘diversity is beautiful’ film just in time for the 2020 Presidential election!

If you have been a long time reader of RRW, you know my side interest was in SNAP fraud, otherwise known as food stamp fraud, not the little stuff, but the huge scam involving trafficking in food stamps.

This blog will be about that fraud and a heckuva lot of other frauds being perpetrated on US taxpayers and average citizens. There is medicare and medicaid fraud, money laundering scams, daycare fraud, vote fraud, immigration and asylum fraud, and even frauds on lonely little old ladies using popular dating services….

….not to mention crimes and terrorism that don’t involve money, but threaten our safety and the safety of our country.

So you can see, I will have a lot of material to write about!

You will be happy to hear that I don’t expect to write more than one or two posts a day with the exception of sending out short, time sensitive fraud alerts as they come up.

And, one last thing!  I have chosen a clean website format and hope to keep it simple to read and navigate.  There won’t be any ads popping up either!

(I occasionally still post a few things at twitter, but they clearly were working to diminish my reach.)

P.S. Be sure to read my rules about commenting under the header.

34 thoughts on “Welcome to My New Blog!”