One of the most maddening things one observes when following the US Refugee Admissions Program is that the word “refugee” has been so bastardized by the Left that it has no real meaning.
Everyone on the move in the world is not a refugee!


To be a legitimate refugee one must have a credible fear of being PERSECUTED if returned to the country of one’s persecution—in Omar’s case Somalia.
Yet, time and again, we see refugees popping “home” to take care of unfinished financial business, like selling a house, visiting grandma, or carrying money back in suitcases!
Where is the fear?
In case you are one of those Americans (there are many because I’ve heard from them!) who were under the impression that refugees go home when the conflict (or whatever) that allowed them to come live here is over, you are misinformed.
‘Refugees’ are here permanently!
No wonder when the average American learns even the most rudimentary bits of information about the UN/US Refugee Admissions Program shock turns to sneering disgust.

We are being played!

Yesterday, PJ Media published a lengthy and detailed expose’ on newly elected Minnesota Rep. Ilhan Omar that is worth reading.  Did you know that Nancy Pelosi will allow her to sit on the Foreign Relations Committee!
You need to read it all, but for my purposes, the information about her trips to Somalia put a lie to her fear of persecution that supposedly was the reason she and her extended family are here in the first place.
PJ Media (hat tip: Paul):

Any significant involvement by a U.S. citizen in Somalia’s election process would likely raise eyebrows at America’s intelligence agencies.
On December 20, 2016, just a few weeks after her election to Minnesota’s state legislature, Ilhan Omar was in Mogadishu with then-President Hassan Sheikh Mohamud, a favorite for re-election. He reportedly invited her to appear with him prior to the election taking place.
Omar likely met at least one other Somali presidential candidate on her trip. According to a speech by her soon-to-be husband Ahmed Hirsi, Ilhan had just flown from Nairobi to Mogadishu on a plane with former Somali Prime Minister Mohamed Abdullahi Mohamed, known as “Farmaajo” (“Cheese”).
Farmaajo — a U.S. citizen who, inconceivably, had boarded that plane as a Buffalo, NY, cubicle employee of the New York Department of Transportation — was the eventual surprise winner of Somalia’s presidency on February 8, 2017.

Much, much more here.
This post is filed in two categories: immigration fraud and politicians as frauds!

We should have a law that says if a country becomes safe enough to visit on business and pleasure, then the ‘refugee’ is obliged to go home and improve their own country! (I can dream!)  Right?

The judge in the case said the Election Board officials who registered her “don’t know what they are doing.”  Or do they?
I’ve had this story for a few days (thanks to reader Nancy), but am just getting to it because of the more pressing news from Nevada, Ohio and Virginia.
From Newsweek (I am actually surprised it is even being reported nationally!):

A permanent resident of North Carolina will not face prison time after she was illegally allowed to vote in three separate elections.

Hyo Suk George, 70, was charged with illegal voting by the U.S. Department of Homeland Security after she reportedly voted in 2008, 2010 and 2016 in Columbus County. Instead of sentencing George to six months in prison, U.S. District Judge Terrence Boyle fined George $100.
George arrived in the United States from South Korea in 1989. She got a green card in 1995 and has worked in housekeeping and the fast-food industry, her federal public defender Sherri Alspaugh said. She registered to vote “next to the senior center” after taking the advice of a town council member, according to the News & Observer. [They should be naming the town council member!]
Alspaugh said her client did not remember whether she registered at the county board or a library, but said there were likely volunteers working registration. 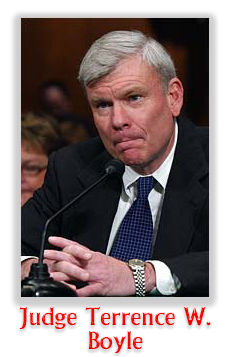 In his ruling, Boyle also expressed frustration toward the election board in Whiteville, North Carolina, because it allowed George to register to vote using her green card, Social Security number and driver’s license, the News & Observer reported.
“So they see a green card and say, ‘That’s OK’ because they don’t know what they’re doing,” the judge said. “They ought to be a little smarter than that.”
Boyle added that the same amount of attention that is placed on voters should be placed on educating election officials. Green cards give immigrants permanent residency in the United States but not citizenship. Only U.S. citizens are allowed to vote.
An investigation by the North Carolina Board of Elections found that 508 voters who cast ballots in the 2016 election were ineligible to vote. Of those, 441 voters were individuals serving active felony sentences. Only convicted felons who have completed their sentences are allowed to vote in North Carolina.
The election board also found that 41 noncitizens voted and 24 voters cast ballots twice. Two individuals reportedly voted using the names of family members who had recently died, the News & Observer reported at the time.

As I’ve said before, if you are looking for something to do, watch-dogging your local Board of Elections would be a very useful project.