No one is talking! What are they hiding?

“My only assumption can be that the hard facts concerning the shooting are so egregious, and so threatening to the incoming Democratic Congress and new Biden Administration that the American people are once again being treated as mushrooms; we are kept in dark and fed piles of stinking manure.”

Before I tell you more about what Devon is asking, evidence is growing that your Patriot voices are not weakening, but are growing in spite of efforts by Big Tech to silence us all so that Biden and the Dems can do whatever they want.

For example, it took less than 24 hours for Patriot social media to explode over the plight of National Guardsmen being thrown out of the Capitol and relegated to a garage for their breaks from duty (why are they still on duty anyway?) for the Dems in power to see the PR nightmare and scramble to invite them back into the Capitol.

See The Hill just over a half an hour ago:

Last night on Twitter, story from Politico of all places! “We feel betrayed!” 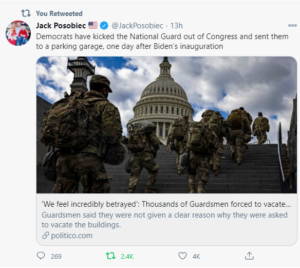 More Patriot Power, this at the National Pulse:

The Most Popular President Ever’ Is Getting DESTROYED By ‘Dislikes’ On YouTube.

Videos posted to Joe Biden’s White House YouTube account are getting flooded with ‘dislike’ interactions from the American public – some even dwarfing the number of likes on a video by over six times.

The data is the latest evidence at odds with President Biden receiving the most votes in any presidential election in U.S. history.

At the time of publishing, of the seven videos uploaded to the account – which now has comments turned off – all have more dislikes than likes. In most cases, the like to dislike disparity is striking.

Patriots, keep up the good work! Keep using your voices to throw them off balance. 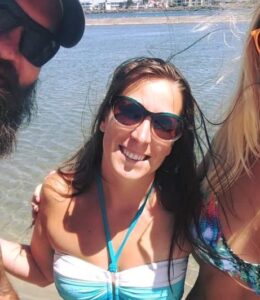 Make sure the question “Who shot Ashlii Babbitt?” is spread far and wide!

See Michael Devon’s questions, the ones we all want answered, then this:

Ten of millions of Americans have hundreds of questions about the most watched political shooting of the twenty-first century. Not surprisingly, the American mainstream media remains irrationally incurious. After all, what loyal lapdog would bite the hand that feeds it?

Why aren’t we being told who shot Ashli Babbitt?

It has been over two weeks, what are they hiding?

See all of my posts tagged January 6th 2021 for my coverage of the Capitol riot.

If you are interested in Biden lifting restrictions on migration from terror-producing countries, see my post at RRW this morning. Cultural enrichers on the way!

5 thoughts on “Who Shot Ashli Babbitt? Ask that Question and Show Your Patriot Power”