Update August 5th:  Be sure to see my post yesterday on Prince Pombo’s assertion that the Twitter account in that name is a fake account.  We learn he has a different last name.
Update/Correction (maybe):  I haven’t had a chance to look into this story but it appears that Prince Pombo says that someone made up a false Twitter account with his name.  Hmmm… Here is the Portland Press Herald story.  Prince Pombo Mafumba was shocked to learn that someone had done this.  I’ll report more tomorrow….
The money Prince Pombo is talking about is the $850,000  (give or take a few thousand) that generous do-gooder Americans have sent for the care of the African asylum seekers who arrived recently (and unexpectedly!) in Maine after illegally crossing the US southern border.
(See all of my previous posts on the migration of the DR Congolese to Maine by clicking here.)
And, so you don’t forget, we have admitted 50,000 from the DR Congo through the US Refugee Admissions Program and thousands more through the Diversity Visa Lottery which begs the question: couldn’t they wait their turn for legal admission to the US?
Apparently not, and this story (hat tip: Frank) about one of their spokesmen—Prince Pombo—raises even more questions.
He says he traveled for three years after leaving the DR Congo. He even lived in Brazil and married a local woman there.  Why didn’t he ask for asylum in the safe country of Brazil? or any other safe country he entered over those three years?  Fishy, very fishy!


First have a look at this story about how Mr. Pombo got to Maine.
And, you will see below that “professor” Pombo gave a TED talk in 2018.  Hmmm!


Then see that the Portland City Council debated recently about how to spend the pot of money kind Americans sent for the poor struggling Africans.  And, see that the Congolese want out of the Expo where they are presently housed.  (But this isn’t happening fast enough to suit Mr. Pombo, as you will see as you continue reading.)

PORTLAND, Maine —
Members of the Portland City Council will meet Thursday night to discuss how to spend $850,000 in donations to help asylum-seekers who have come to the city.
The meeting of the council’s Finance Committee is the first to look at where to spend the money. The full City Council will eventually have the final say.
Committee Chairman Nick Mavadones said the donations are a welcome addition to the $200,000 the city had originally budgeted for aid for asylum-seekers.
“When the city put out the request for people who were interested in to participate, it was about housing, shelter and basic necessities, and that is what the intent is, to pay for the costs associated with that,” Mavadones said.
The city is also counting on an infusion of state funds to reimburse some of the costs of staffing and serving the people who have been staying at the emergency shelter at the Portland Expo.
Last week, Gov. Janet Mills announced changes to general assistance rules to allow the state to help asylum-seekers.
Leaders of the city’s immigrant groups spoke at City Hall Thursday afternoon to send a clear message that asylum-seekers are ready to leave the Expo.
“They are willing to relocate, and they are willing to go whenever they are sent because any place is better than what they have at the Expo,” Prosperity Maine Executive Director Claude Rwaganje said.
The city faces an Aug. 15 deadline to move asylum-seekers out of the Expo. Thirty families in the greater Portland area have volunteered to take some of the asylum-seekers into their homes.

But they want their own homes says Mr. Pombo on his Twitter account (guess he has a phone at the Expo)!  They feel that the money is theirs!
In case you are wondering that is a flag of his HOME country on this new American’s Twitter account. And, although he speaks in broken English I think you can figure out what is going on here. 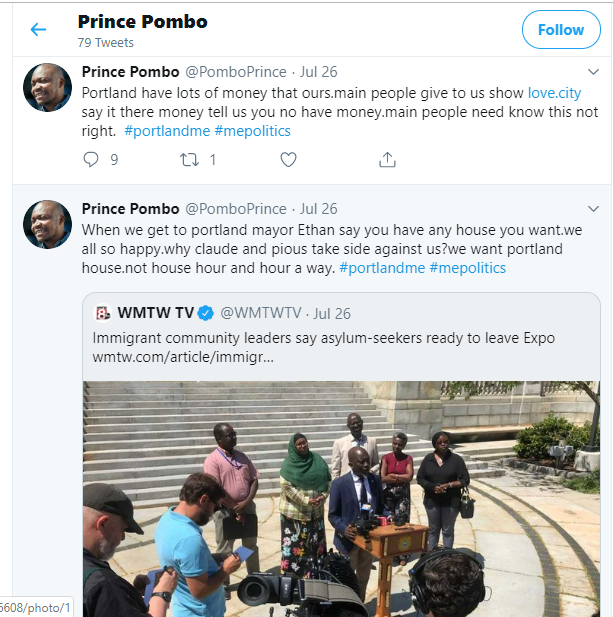 Interesting!
The vast majority of migrants from the DR Congo are not Muslims, but some in this bunch must be or they wouldn’t be demanding Halal food.
Ahhhh! The joys of diversity…..
Again, See all of my previous posts on the migration of the DR Congolese to Maine by clicking here.
08/01/201909/21/2019 ~ Ann Corcoran ~ 5 Comments

I’m posting this story from Georgia because you have to laugh sometimes!
Honestly, regular old run-of-the-mill fraud—food stamps, Medicare, charity, and so forth— is what I expected to be writing about when I launched ‘Frauds and Crooks’ in January, but the numbers of serious crimes and murders perpetrated by ‘new Americans’ caught me by surprise. And, it can get pretty distressing.
Soooo…
When I saw this story, thanks to reader Robert for sending it, I figured we could lighten up and laugh for a change.
Fake dentists!

This story is from the Atlanta Journal Constitution,

Two women are facing felony charges after Cobb County police said they had been operating a dental practice without a license for nearly a decade.
Bianca Zambrano-Blanco, 35, and Carolina Rojas Morales, 40, were both arrested Tuesday, according to police spokeswoman Officer Sydney Melton.
[….]
Cobb police opened an investigation into the practice in January after a woman, identified in an arrest warrant as Lina Banciu, said she received a botched root canal there.Banciu’s husband, Ruben Banciu, told Channel 2 Action News his wife was recommended to Morales through word of mouth. The woman wanted to save money and agreed to undergo the procedure when Morales told her it would only cost $500, the news station reported.
However, Banciu was in pain for days after the procedure. According to her husband, she drove back to the practice and demanded a refund. When she got there, another patient there was in tears with a swollen face, Banciu told Channel 2.
An arrest warrant obtained by AJC.com accuses Morales of doing Banciu’s root canal improperly and causing irreparable damage to the woman’s tooth.
Investigators found records that indicate the unlicensed practice dated back as far as 2010, Melton said. Police found numerous victims.
[….]
Morales was booked into the Cobb County jail, where she is being held on a $25,000 bond, records show. Zambrano-Blanco was also booked into the Cobb jail, where she is being held on an Immigration and Customs Enforcement detainer.

I guess this is an example of the immigrant entrepreneurial spirit that the New American Economy says is helping to bring economic boom times to American towns and cities. Right?