First, you might want to revisit my post of August 1st, here, where I reported about the ‘welcome’ the African migrants, the asylum seekers who came across the US southern border, are getting in Portland, Maine.
The city raised over $850,000 from charitable donations for the African migrants mostly from the DR Congo*** living in the Portland Expo, and is in the process of figuring out how to best use it for the care of this group who must be out of the Expo by mid-month.
I also took some screenshots of a Twitter page (yes, it was there on August 1st) attributed to a “Prince Pombo.”
That man, who now says his name is Prince Pombo Mafumba denies that he ever had a Twitter account and reported the fake account to the police.
Below are some snips from the Portland Press Herald story that also appeared on August 1st, thanks to reader Lisa for sending it.
However, before I get to the article, I want to know why Mr. Pombo (aka Mafumba) was not using the name Mafumba in earlier news accounts, like this one in June when he told the Associated Press his name is Prince Pombo, and why he did a TED talk as Prince Pombo—a TED talk he gave in Portuguese (the primary language of Brazil)—here in 2018.
Dismissing the idea that there are two people named Prince Pombo, we see that he says he is a professor in the TED talk and Mafumba told the Press Herald he is a professor, so there can’t be two Professor Prince Pombos, right? 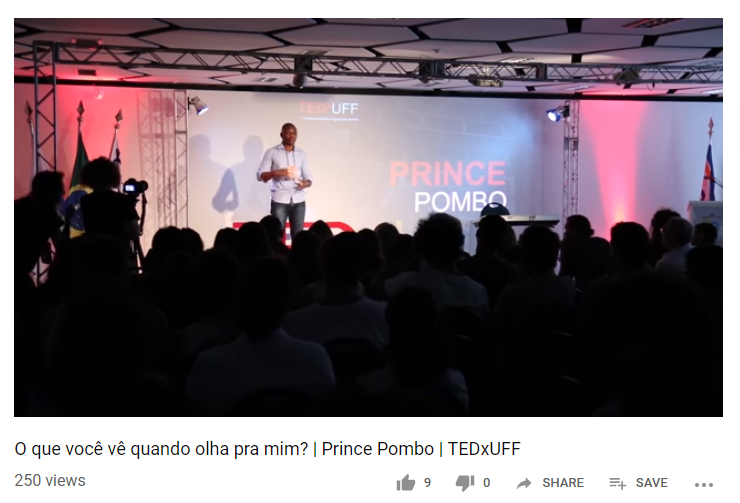 He was a pretty well-connected ‘refugee’ to have access to TED.
And, then of course, my primary question is why, if he was settled in Brazil with a Brazilian wife and baby, he didn’t ask for asylum there, but instead ‘found his way’ to the US southern border with a group of other Africans who were then dispersed to several US cities including Portland?
Lots of questions and I sure hope the first one that an asylum judge asks is:  What is your real name? And then, why didn’t you seek asylum in Brazil?

When Prince Pombo Mafumba arrived in Portland on June 12, it was the last leg of a yearslong journey that began with his escape from the Democratic Republic of the Congo and a long, dangerous journey through Central America to reach the United States. 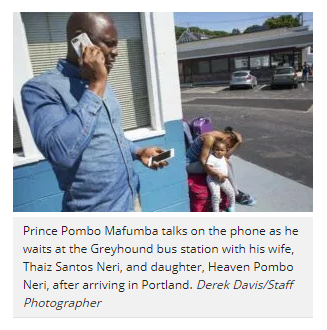 Mafumba, a political science professor, is one of the more than 400 African migrants who crossed the southern U.S. border and came to Portland since June 9 to seek asylum from political persecution and violence in his homeland.
[….]
Unbeknownst to Mafumba, someone had created a fake Twitter account in his name shortly after he was mentioned in a newspaper article. The imposter used a photo from the newspaper as his avatar and began tweeting in broken English about his experience in Portland in an obvious attempt to smear his fellow asylum seekers and stoke xenophobia and anger among Mainers. The account posted repeatedly about Ebola, smears against gay men, boasts of being taken out to restaurants and false expectations that the government would provide him a house and a car.
“I was surprised and shocked and scared,” Mafumba said of his reaction when the account was brought to his attention by a leader in the local Congolese community.
He reported the fake account to police. “I never experienced stuff like this before.” [Really? So this is the worst you’ve experienced? I thought you were persecuted in Africa?—ed]
It’s unclear who is behind the fake account. Messages sent to it were not returned this week.
The South Portland Police Department confirmed Thursday that Mafumba had reported the incident and that a fraud investigation was underway.
Mafumba said the comments being attributed to him on the fake Twitter account are the exact opposite of what he truly feels and thinks. He wasn’t even staying in the Portland Expo when the vast majority of the tweets were posted.
Within three days of his arrival, Mafumba, who speaks English, had befriended a couple volunteering at the Portland Expo who offered to let Mafumba’s family – a wife and 1½-year-old daughter – live in their South Portland home.

The article then starts pointing fingers….

Within the last week, the account was picked up by the Maine First Project, a conservative political organization run by Republican state Rep. Larry Lockman, who has repeatedly pursued anti-immigrant legislation and echoed President Trump’s “fake news” talking points.

As of Thursday morning, the account was still active, even though several people, including local activist Hamdia Ahmed, have reported it to Twitter.

It was still active when I took the screenshots here.
Sure hope we learn who created the ‘fake’ account!
And, by the way, the Press Herald tells us this:

Asylum seekers are prohibited from working under federal law until at least six months after their asylum application is filed. Gov. Janet Mills, a Democrat, last month made an emergency rule change to the state General Assistance law to make the newly arrived asylum seekers eligible for vouchers for food, shelter, medicine and other necessities for up to two years.

There is much more in the story, go here, to read it all.
I sure hope we hear how the investigation turns out because there is some fishy stuff going on in Maine involving the African migrants who ‘found their way’ to Portland.
One last thing I keep harping on:
***Just so you don’t forget, we have admitted 50,000 from the DR Congo through the US Refugee Admissions Program and thousands more through the Diversity Visa Lottery which begs the question: couldn’t they wait their turn for legal admission to the US?  This bunch jumped the line!