“You just can’t believe you’re seeing this. You think your mom is safe and now this is going on.”

Here is the pair of aides who taunted a 91-year-old patient in their care at a Chicago area nursing home, filmed their sick game and posted it on Snapchat.

The first version of the story I saw yesterday was at a UK publication.

What! People in the UK know about this and we don’t!  But, this morning I see the story was reported locally.

Any sign of it on national news?  CNN? MSNBC? Probably not because here (dare I say it!) we have brown people torturing a little old white lady which doesn’t fit the mainstream media narrative!

Before I get to one local story (very few posted photos of Montesa and Cortez), be sure to see my previous posts on elder abuse in the case of Billy Chemirmir who was allegedly   murdering elderly women in assisted living homes in Texas, and the case in North Carolina where a Guatemalan ‘caregiver’ was sexually assaulting vulnerable women in his care.

And, then there was the rape case at a nursing home in Seattle, see here.

Is there an epidemic of abuse, even murder, going on in American nursing homes?

We are constantly bombarded with news about vulnerable women and children crossing our southern border, but what about our own vulnerable senior citizens! Why aren’t we hearing about them!

GLENVIEW, Ill. — A Glenview nursing home was sued after caregivers posted Snapchat videos of themselves taunting a 91-year-old dementia patient.

The short Snapchat video shows 91-year-old Margaret Collins who has dementia. In the video, it said “Margaret hates gowns!” with two laughing and crying emojis. It showed a certified nursing assistant repeatedly putting a hospital gown on top of an elderly woman while she tries to wave it away.

“You just can’t believe you’re seeing this,” Joan Biebel, Collins’ daughter, said. “You think your mom is safe and now this is going on. You’re just trying to figure out what the heck is happening here.”

The incident happened last December at the Abington of Glenview nursing and rehab center. Family members said staff knew that Collins did not like hospital gowns and preferred to wear her own clothes.

Brayan Cortez and Jamie Montesa were both charged with misdemeanor disorderly conduct. Police said Cortez was in the video and Montesa recorded it and they said she told investigators she had recorded video of Collins in her wheelchair once before.

“If they’re in her room, they should’ve been there for a reason to help, her assist her, not to exploit her and threaten her and demean her and post it on social media,” Biebel said. 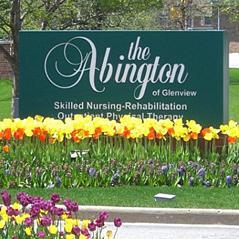 Now, the family is suing the nursing home, its parent company and the workers. The lawsuit seeks more than a million dollar in damages.

Administrators said in a statement:

“The privacy and dignity of our residents are of the utmost concern at The Abington. Recently, two employees were immediately terminated when it was determined that they violated our standards and policies.”

Police reports said Cortez and Montesa did initially return to work after serving a six day suspension. The Illinois Department of Public Health reported administrators initially concluded the allegations were unfounded after co-workers vouched for the pair.

“This was a sick game that two CNAs tried to play for their own enjoyment and by filing this lawsuit and pursing this lawsuit we will prevent this from happening to other individuals in this facility, as well as other facilities across the state,” John Perconti, attorney, said.

The state found Abington failed to implement its abuse prevention policy. Family members moved Collins to another facility, but they say her health has deteriorated.

My best advice for any of you who must put your loved one in a nursing facility is to check it out carefully and visit often and without notice. If you can’t do that all the time, find friends and relatives who will visit the patient at odd hours.

And, even if your family member or friend has dementia, listen to them if they show signs of fear or complain in any way about their care.  (Finally someone listened in the North Carolina case!)  Perhaps even look into getting a camera for the room if you are suspicious about nurses, nurses aides, and others with access to your loved one.