Here is one version of the news this week.  Notice they work closely with Lutheran Immigration and Refugee Service*** which is almost completely federally funded.

It appears that these Lutherans have run out of poor and homeless AMERICANS in need of Christian charity. 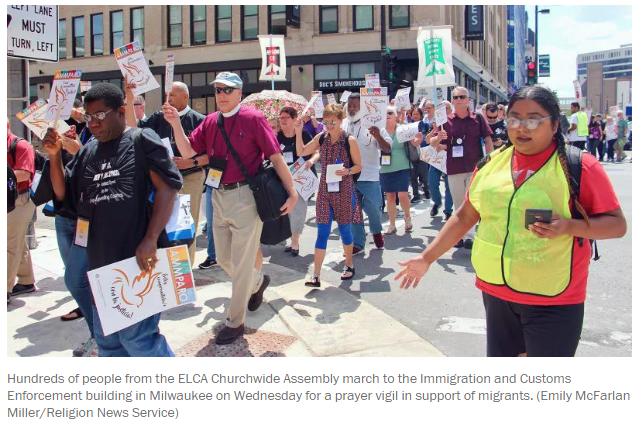 MILWAUKEE, Aug. 8, 2019 /PRNewswire/ — The Evangelical Lutheran Church in America (ELCA), today at the 2019 ELCA Churchwide Assembly declared itself a Sanctuary Denomination, dedicated to serving and supporting the protection of migrants in communities nationwide. The ELCA is the first mainstream church body in America to declare itself a sanctuary denomination. The movement was spearheaded by the Metropolitan New York Synod (MNYS), one of the 65 synods of the ELCA.

“Christians have offered sanctuary for two thousand years, continuing an ancient biblical practice in which cities and houses of worship provided refuge and asylum for people fleeing injustice,” stated Christopher Vergara, who serves as chairperson of MNYS’s AMMPARO/Sanctuary Ministry. “Beginning in the 1980s, the Sanctuary Movement was a faith-based initiative to protect Central American refugees fleeing civil war and seeking safety in the United States. Today, the New Sanctuary Movement is a revived effort to protect undocumented migrants from needless jailing procedures and deportation, and to address the dire situation within the Department of Health and Human Services that has resulted in the stripping of services to refugees and unaccompanied children.”

By its vote, the ELCA Churchwide Assembly deemed that sanctuary means not only provision of shelter but also:

A response to raids, detentions, deportations, and the criminalization of immigrants and refugees;

A strategy to fight individual cases of deportation, to advocate for an end of mass detention, and to amplify immigrant voices;

A vision for what communities and the world can be; and

A moral imperative to take prophetic action of radical hospitality rooted in the ancient traditions of our faith communities.

[….]
Working locally with organizations like Lutheran Immigration and Refugee Service, Lutheran Social Services, The New Sanctuary Coalition, The New York Immigration Coalition, and the ELCA’s AMMPARO program, the MNYS has created a network of sanctuary congregations ready to help protect refugees and undocumented people from arrest and deportation.The pillars of the program lie in education, advocacy, and awareness.

5 thoughts on “Evangelical Lutheran Church Declares Itself a Sanctuary Church, First in Nation”