A reader just reminded me of Obama’s propaganda initiative to plant the idea that refugees and immigrants bring the joys of diversity and economic good times to cities welcoming migrants of all stripes.


You might want to dismiss this as old news and not worth remembering, but if you recall at the time, Obama’s Task Force on New Americans was a government-wide plan that they wanted to place into the DNA of federal, state, and local governments presumably by setting policies, electing officials and planting employees who would carry out the agenda long after Obama was gone from the White House.
Here they are bragging about their successes in 2015:

In 2015, the Task Force has been busy implementing recommended actions and highlighting local models of success.

(Don’t miss the action plan! You might want to download it before it disappears!)
Continue here and you will see that they had (have!) some key initiatives. One was to tell the stories (via their media friends) of successful refugees and immigrants—they love stories—to bring the general public to their point of view that all immigration is a net positive for America.
Another was (is!) to spearhead a citizenship drive to get as many immigrants voting as they possibly could (can!). All, of course, under the rubric that this was all about “integration.”
As was intended, these initiatives continue to be promoted and it is much of the reason I wanted to write this blog as my small attempt to balance the news you read—-heck we can tell stories too!
Problem is that we don’t do it often enough—tell the not-so-sweet stories about what diversity often brings to America!
I’m posting this information from the ‘Welcoming Communities’ plan below for your future reference (and in case it is scrubbed!). 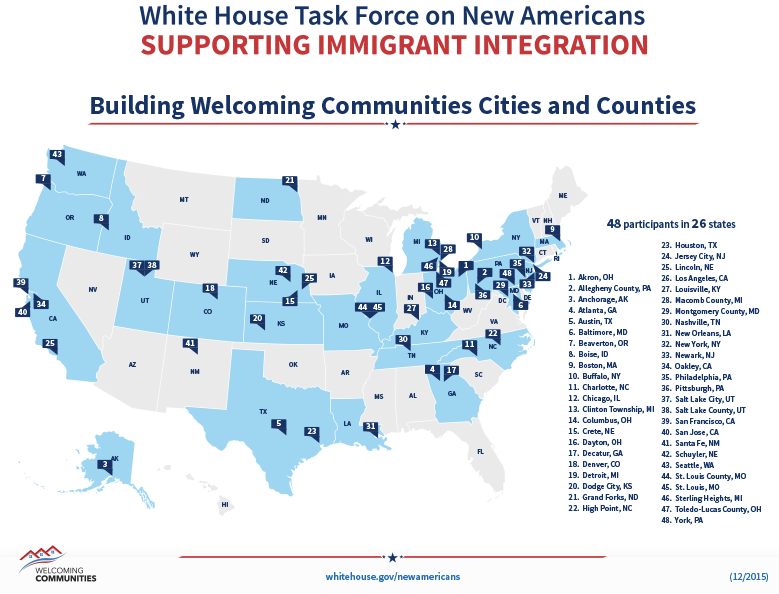 Let me be clear! These initiatives did not go away when Obama did!

If you live in any of those “welcoming” locations, are you keeping an eye on your elected officials and speaking up?

4 thoughts on “Is Obama's Task Force on New Americans still a working plan?”