Or, if Biden, with his cozy relationship with the Chinese Communists, is installed in the White House, will it be back on the table?

“I guess in answer to your question, the China beef deal is not dead. It’s on hold and we’re still working on it.”

I covered the news of Montana beef producers’ (with Republican Senator Daines apparent instigation) plans back in 2017 at Refugee Resettlement Watch and warned that if China built (or financed a slaughterhouse in the state of Montana) it would not be a source of employment for local low skilled workers, but would be a draw for more refugee labor.

I also said that I would expect the Chinese to send in many of their own workers as well.

Daines won reelection on November 3rd, but in the lead up to the contest, the Democrats blamed Daines (and Trump) for ruining the deal (so far at least!).

Montanans must be watchful because apparently snuggling up to do business with China is a joint venture of both political parties.

Here is the news from the Billings Gazette from October explaining where that deal stands now (emphasis below is mine):

The Montana Democratic Party says a trade-war-plagued sales agreement between the Montana Stockgrowers Association and online China grocer JD.com has all but fallen apart, for which Democrats blame U.S. Sen. Steve Daines.

In a press conference this week, Democrats said the agreement between the state’s largest cattle association and JD.com had produced nothing after three years. Three Montanans who currently own cattle or have owned cattle in the past shared their disappointment.

Trade disputes with China have stifled the sale. The Montana Stockgrowers Association said their agreement is still alive, despite a tough two years of trade disputes between the United States and China.

“This would have been a very big deal to us. We would have been able to sell 80,000 to 90,000 cattle through this deal to China,” said Ben Peterson, a Judith Gap-area rancher. “We should be able to count on our elected officials to keep their word, but Daines seems to not think so.”

The meeting took place in Maudlow, northwest of Bozeman, and was arranged by Daines, who had presented a small cooler of Fred Wacker’s steaks to China Premier Li Keqiang during a trip to Beijing.

Wacker told Cui and members of the China Chamber of Commerce that the Stockgrowers wanted a sales agreement for Montana-branded beef. Those talks resulted in a memorandum of understanding between the Stockgrowers and JD.com for $200 million in cattle sales from January 2018 through the end of 2020.

Additionally, a $100 million investment in a Montana packing plant was part of the trade.

Several things have complicated the Stockgrowers’ beef agreement, President Trump being the first. 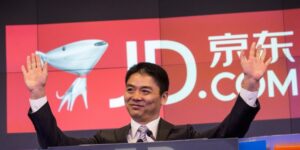 Further complicating the beef agreement was a shake-up of the JD.com hierarchy. The company’s president, Richard Liu, was accused of rape and arrested in Minnesota in August 2018. Liu was never charged, but a civil lawsuit followed. Liu resigned in late 2019.

Democrats didn’t mention JD.com’s scandal in their press conference. They focused on Daines supporting trade with China early, but more recently siding with Trump on the trade war. The senator’s support for China has been a part of the Democrats’ campaign messaging against Daines, as they promote the Senate candidacy of their own Steve, Montana Gov. Steve Bullock.

Democrats have branded Daines the “China Cheerleader,” at a time when U.S. sentiment toward China is low, particularly for Republicans. A Pew Research Center study in April found that 72% of Republicans had a negative view of China, as did 62% of Democrats.

Tyson was a potential processor for the first carcasses the Stockgrowers produced, a plan A, while the partners worked out the details of a meatpacking plant located in Montana. The packing plant plans got as far as siting potential locations.

“I guess in answer to your question, the China beef deal is not dead. It’s on hold and we’re still working on it,” Wacker said.

Former Montana U.S. Sen. Max Baucus, a Democrat, worked for 11 years to get China’s ban [they had banned US beef—ed] dropped. Baucus left office to become U.S. ambassador to China in 2014. Daines took up the ban after winning the seat Baucus vacated. That continuity is crucial to Montana agriculture, Wacker said.

There is more here.  Read it all.

A China-loving Biden/Harris White House could easily make Montana the new home of a Chinese slaughterhouse!  Montana will get all the environmental problems along with the invasion of a socially and culturally disruptive migrant labor force!

One final note:  I say this all the time at RRW, if you want to eat beef, buy from a reputable local grower.  I traveled the West and Midwest a few years ago primarily to have a look at meat packing towns and the impact on the towns of refugee labor.  Do not support the BIG BEEF globalist meatpackers—a driving force for importing migrant labor.