“[I]t’s only the Democratic Party—which is the oldest political party in the world—that stands for the ideas and ideals of American liberty.”

(Steve Schmidt, the guy who lost the Presidency for John McCain in 2008)

“Wolves in sheep’s clothing….never on our team to start with!”

While on the subject of political rats, see yesterday’s post about Elizabeth Neumann, I thought you might like to hear about another rat—Steve Schmidt, former Bush and McCain aide who has come out of the closet to announce Surprise! he is a Democrat.

Actually I told you about him here as he was one of the founders of the Lincoln Project, an anti-Trump pac that spent millions inundating the airwaves with vile anti-Trump ads as they pretended to be Republicans who wanted Trump gone.

That post was the inspiration for my category ‘political rats.‘ 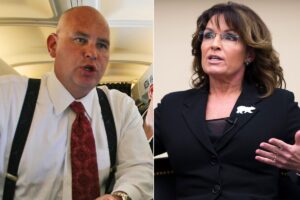 Here (below) is the news of Schmidt’s outing.

By the way, wikipedia reports that his anger at Trump was first about moving the capital of Israel to Jerusalem (he did not want it moved, said Trump would have blood on his hands) and secondly he opposed Trump’s policies involving the southern border.  Anti-Israel, pro-Open borders: Sounds to me that he was a Dem all along.

Schmidt made the announcement during an episode of the “Battleground” podcast published Monday, as he and co-host David Plouffe were discussing the Republican House members and state attorneys general that backed Texas’s ill-fated election lawsuit before the Supreme Court.

“I spent 29 years as a Republican, I’ve spent two and a half as an independent, and later this afternoon I will register as a member of the Democratic Party,” Schmidt told Plouffe. “Because in America today, it’s only the Democratic Party—which is the oldest political party in the world—that stands for the ideas and ideals of American liberty.”

Schmidt worked on the the presidential campaign of late Sen. John McCain (R-Ariz.) in 2008, and on former President George W. Bush’s campaign in 2004.

The former Republican renounced the party in 2018 and identified as an independent. He’s been one of the president’s fiercest critics, and is a co-founder of The Lincoln Project, a prominent anti-Trump PAC.

Sarah Palin on the saboteurs working for the swamp “uniparty!”

Tucker Carlson gives Sarah Palin an opportunity to lash out at Steve Schmidt and Nicolle Wallace. She says there was a lot of sabotage going on there. pic.twitter.com/Mw6QCmX3uH

No wonder the swamp hates Trump so much!  He has exposed their decades-old game—a game that cheats Americans out of the President of their choice.

Update:  Some of you have asked where you could get more information about the rally. Here is link to an organizing site.  And apparently Women for America First will be there again.

And, see this rousing video posted on December 19th and in less than 24 hours look at those numbers!

I will leave this pinned at the top and as news about the January rally develops, I’ll post it here.