If you missed it, that post where I reported on an interview with retired General Thomas McInerney who called the election heist we have been witnessing a treasonous act, is here.

Imagine my surprise to get this notice (below) from Twitter.  And, imagine my further surprise to learn that someone in Germany can use a German law to silence my speech!

Here is a screenshot.  I am assuming this is legitimate as the link in the e-mail takes you to a Twitter page, here. 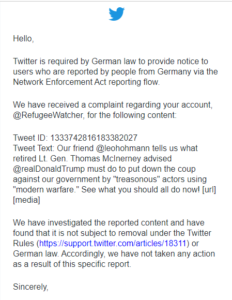 But, what the heck is the Network Enforcement Act?

It is a controversial GERMAN law passed in 2017!

Reporters Without Borders and other critics spoke of a “rush job” that “could massively damage the basic right to freedom of the press and freedom of expression“.

So Germans can complain to Twitter about something I, an American citizen, is saying about an American election!

I wonder if Twitter asks the complainer for proof of German residency or citizenship?

By the way, I know that Twitter has messed with my account @RefugeeWatcher there for a very long time, so I am not worrying about gathering more followers, nor do I tweet much, but it is, for now, a very handy place to get real time news on the election fraud such as the President’s tweet about the Hannity interview in my previous post.

This interview with Sean Hannity last night is a must watch.

I know it is one of the many many examples of patriotic Americans coming forward to say they witnessed some aspect of the massive, apparently coordinated fraud, but I was particularly interested in the destination of pallets of ballots driven across state lines to Lancaster, PA.

First watch the video.  I guess Fox News has realized that they better let some of their hosts talk about the big steal or suffer more defections to Newsmax or OAN!

What do you think of when you think of Lancaster, PA?  I bet it’s the bucolic countryside and the large peaceful Amish community there!

I think of how Lancaster, PA changed my life in 2007 when Muslim refugees from Russia were supposed to be placed there and instead were diverted to my rural county in Maryland.  It was that act that caused me to spend the next 13 years writing my other blog Refugee Resettlement Watch.

Lancaster, PA is considered the ‘Refugee Capital of the USA’ a reputation that Church World Service has nurtured for over a decade.  CWS is one of nine federal resettlement contractors that is working to change America by changing the people.  CWS is a leading member of the ‘religious’ Left and a politically active socialist group.

The city of Lancaster’s leadership is about as far Left as it could be.  It would be a very good place to hide (until needed) pallets of ballots generated in New York.