And old demented Joe Biden, the guy with supposedly 80 plus million votes for President, comes in third.

You’ve probably seen it, but figured we needed a little boost and I wanted to post Trump’s latest ad anyway.

President Trump has ended former President Obama’s 12-year run as the most admired man in America, edging out his predecessor in the annual Gallup survey released Tuesday.

Time for another ad?

Because they are dupes of those Socialist/Communist strategists who are working to destroy Capitalism and make everyone dependent on the government.

COVID-19 is a dream come true for modern day Commies who have dreamed of this day since Cloward and Piven wrote their thesis in the 1960s.

Here is one more of many stories about how California, with the most Chinese virus cases even as it is the most locked down state in the nation, is suffering.

To those of us looking on it makes no sense that Governor Newsom would want to inflict such economic misery on the people of California, unless….

…..Newsom and other Democrat governors want the suffering to force Americans to move toward Socialism/Communism. 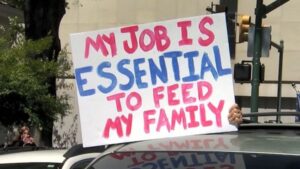 If you still live in California, you probably deserve a medal. Living under the tyrannical rule of Newsom has to hurt. He keeps on adding to his COVID rules, but the only thing the rules accomplish is to prove that lockdowns don’t work. The economy sinks while the CoronaVirus cases surge.

Stephen Moore explains that the lockdowns don’t reduce deaths, and they hurt those who can least afford to be hurt:

Lockdowns are crushing the little guy. Even so, it is the Democrats who are pushing this anti-freedom agenda. Here are the 10 states listed by The New York Times with the strictest lockdown orders: California, Connecticut, Illinois, Michigan, New Mexico, New York, Oregon, Pennsylvania, Rhode Island and Washington. What do they have in common? Democratic governors.

Be confused no longer, they have a STRATEGY 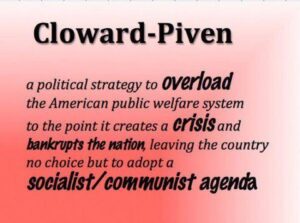 So if you have been confused about why these Democrat governors are behaving in a way that is clearly aimed at bringing down the US economy, don’t be confused.  The Democrat Party has been indoctrinated for decades in the Cloward-Piven Strategy—bring down Capitalism by creating a massive welfare state.

In 2009 I wrote about it at Refugee Resettlement Watch positing that the reason the Left wanted more impoverished refugees and immigrants was to add to the numbers of poor people who would demand more ‘services’ from an increasingly strained government.

Here is my post from 2009.  I know it is long but maybe it will help clear up any confusion you have right now about what appears to be just dumb decisions by dumb Dems.  No, this is a strategy!

More on November 23rd:   Jim Simpson, an expert on the Cloward-Piven strategy has more today at the American Thinker, here.

That is the basic goal involved in the Cloward-Piven strategy that most of us never heard of until Obama and the community organizers got to the White House.  I’ve been reading about it lately, thanks to RRW reader Paul, and it came to mind last night as I considered the fact that Somali refugees had flooded Maine primarily for the generous welfare system (more shortly).

This is just some background from David Horowitz’s Discover the Networks that I want to post so we can continue to build our ‘community destabilization’ category, and not lose the links.

Inspired by the August 1965 riots in the black district of Watts in Los Angeles (which erupted after police had used batons to subdue a black man suspected of drunk driving), Cloward and Piven published an article titled “The Weight of the Poor: A Strategy to End Poverty” in the May 2, 1966 issue of The Nation. Following its publication, The Nation sold an unprecedented 30,000 reprints. Activists were abuzz over the so-called “crisis strategy” or “Cloward-Piven Strategy,” as it came to be called. Many were eager to put it into effect.

In their 1966 article, Cloward and Piven charged that the ruling classes used welfare to weaken the poor; that by providing a social safety net, the rich doused the fires of rebellion. Poor people can advance only when “the rest of society is afraid of them,” Cloward told The New York Times on September 27, 1970. Rather than placating the poor with government hand-outs, wrote Cloward and Piven, activists should work to sabotage and destroy the welfare system; the collapse of the welfare state would ignite a political and financial crisis that would rock the nation; poor people would rise in revolt; only then would “the rest of society” accept their demands.

The key to sparking this rebellion would be to expose the inadequacy of the welfare state. Cloward-Piven’s early promoters cited radical organizer Saul Alinsky as their inspiration. “Make the enemy live up to their (sic) own book of rules,” Alinsky wrote in his 1972 book Rules for Radicals. When pressed to honor every word of every law and statute, every Judaeo-Christian moral tenet, and every implicit promise of the liberal social contract, human agencies inevitably fall short. The system’s failure to “live up” to its rule book can then be used to discredit it altogether, and to replace the capitalist “rule book” with a socialist one.

You should take some time and read Cloward and Piven’s 1966 seminal work in the Nation magazine to fully understand the concept.  They (and their comrades today) want to enroll as many people as they can on public assistance, cause a crisis by overloading local governments, bring greater federal control and ultimately collapse Capitalism as the federal government takes greater control and brings about ultimately a guaranteed wage for all— a redistribution of wealth.

This is the opening paragraph of the Nation article:

[Update! The article is no longer available at The Nation, but a Leftwing publication reposted it here,at Common Dreams.]

How can the poor be organized to press for relief from poverty? How can a broad-based movement be developed and the current disarray of activist forces be halted? These questions confront, and confound, activists today. It is our purpose to advance a strategy which affords the basis for a convergence of civil rights organizations, militant anti-poverty groups and the poor. If this strategy were implemented, a political crisis would result that could lead to legislation for a guaranteed annual income and thus an end to poverty.

My theory is that the “poor” of the 1960’s were, in subsequent decades, entering the middle class.  Thanks to Capitalism there weren’t enough of them to collapse the system and many other Americans have an  antipathy to living off the government and accepting welfare!   So community organizers need the immigrants and refugees who have become accustomed, in the case of refugees, to living off of the United Nations, to help swell the welfare rolls.  That is the only logical explanation for the Obama Administration continuing to resettle very high numbers of refugees right now (in a recession!) when there is little work for them—well that, and the desire on their part to create a magical borderless utopian world.

The Somalis who migrated to Maine are only too happy to comply, next!  Here it is.

So here we are, decades later, just where Cloward-Piven, Saul Alinsky, Barack Obama, AOC and Ilhan Omar wanted us to be—redistributing wealth by handing out welfare checks to most of America.

If Biden/Harris succeed in stealing the White House, the demented old man could finish us off by handing us over to the Communist Party of China.