The other day I posted a list of conservative news aggregator sites (see it updated here with more reader suggestions), but you should be reading the leftwing propaganda sites from time to time as well—very edifying.  Like this one….

Common Dreams snarks that Vice President Mike Pence, who they intimate is an Islamophobe, got the Chinese Virus vaccine and by doing so, they say, he is a hypocrite.

I’m posting this to show you what the hard Lefties are writing, but also to inform you that Turkish Muslims living in Germany are the creators of the Pfizer vaccine.

What Common Dreams  wants its readers to know is this—you see all immigrants are good people who benefit society.

But, frankly for every deserving immigrant I can give you ten frauds, crooks and criminals as I have been saying and cataloging for over a decade. 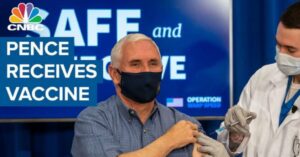 Here is why he is a hypocrite.

Pence served for four years in the Trump administration, which initiated a visa ban against Muslims. Although he had in 2015 called any such ban “unconstitutional,” he folded when Trump insisted on it and proudly stood behind the Mad President when he signed the order.

Pence has, further, improperly pressured USAID to route US foreign aid to the Middle East away from Muslims and to Christians instead.

Pence is a serial science denier. He says smoking cigarettes does not cause cancer. He has called the human-caused climate emergency “a myth.”

The Pfizer-BioNTech vaccine involves science and Muslim immigrants, so why is he getting it?

Pfizer partnered in developing the vaccine with a German firm, BioNTech, which was founded and is headed by the Turkish-German husband-wife team of Ugur Sahin and Özlem Türeci. BioNTech really developed the vaccine, though Pfizer is the one with the ability to mass-manufacture and distribute it.

The two are Turkish-German Muslims. [Gasp!]

Author Juan Cole goes on to report (breathlessly) that Sahin and Türeci are now both billionaires.  It is unclear why that matters.

As far as I am concerned the jury is still out on whether the vaccine is a success or not.

Meanwhile, search “new Covid strain identified in UK” and see that the world is in a panic as evidenced by every major news outlet spreading more fear.  Of course the big SCIENCE question is: will Pfizer’s vaccine work against the new strain (assuming it even works on the original strain)?

Yup Eric! This handy graphic going viral on Twitter says it all…

Another bit of evidence to consider….

Any chance that more than 70 million Americans are going to let this go?  Nope!