Three Republican leaders have refused to begin planning for a Biden/Harris inauguration and that has the Leftwing media throwing a hissy fit again.

By the way, it will be interesting to see what kind of inauguration will happen on January 20th in light of the COVID ‘crisis’ social distancing requirements.

Surely if its ol’ Joe and Kamala they will place circles on the Capitol lawn to keep the crowds (ha!ha!) down, but who would bother coming out under the circumstances.

Here is Yahoo News insisting Biden won and so how dare the Republicans refuse to start planning:

Republicans on the Joint Congressional Committee on the Inaugural Ceremonies voted on Tuesday against a resolution stating that the committee was preparing for the inauguration of President-elect Joe Biden and Vice President-elect Kamala Harris.

Sen. Majority Leader Mitch McConnell, R-Ky.; Sen. Roy Blunt, R-Mo.; and House Minority Leader Kevin McCarthy, R-Calif., all voted against the resolution. The three Democrats on the committee, House Majority Leader Steny Hoyer, D-Md., who introduced the measure; House Speaker Nancy Pelosi, D-Calif.; and Sen. Amy Klobuchar, D-Minn., voted in favor. The measure, which would have recognized what Democrats and some Republicans say is obvious — that Biden won the election — failed to pass on a 3-3 tie vote.

“The extent to which Republicans are refusing to accept the outcome of the election and recognize Joe Biden and Kamala Harris as our next president and vice president is astounding,” Hoyer said in a statement released after the meeting of the committee. “Their continued deference to President Trump’s postelection temper tantrums threatens our democracy and undermines faith in our system of elections.”

The presidential inauguration traditionally occurs on the Capitol steps, although, owing to the coronavirus pandemic, plans for the ceremonies on Jan. 20 are in flux.

And as if we didn’t already know….

Hoyer’s motion to recognize Biden and Harris as the winners was basically symbolic; the joint committee has no power to decide who gets inaugurated.

But there was one useful thing in the Yahoo story and it is this.

It directs us to a Washington Post survey of Senators and Members of Congress where we learn The Post attempted to survey all Republicans to see who was willing to say that Biden has won.

Most never bothered to answer.  However, a handful did and of the 26 lawmakers identified as either saying outright that Biden won, or The Post  found comments they made in support of a Biden win and thus created this list of 26.

Now this is a very handy list for you!  If one of the 26 represents you (even if they are retiring), get on the phone today and let them know that you are not happy, that you are in fact pissed.

The headline in the WaPo says 27, but when you actually go to the list there are 26 named.  I’m guessing they originally fingered 27 and someone complained, but the story was never corrected.

I’ve screenshot them below in case they disappear.

If you are not in the habit of reading the Washington Post (I’m not either) then it comes as kind of a shock that there is not even a pretense of reporting straight news. Reporters simply report their opinions as fact.

Those are the findings of a Washington Post survey of all 249 Republicans in the House and Senate that began the morning after Trump posted a 46-minute video Wednesday evening in which he wrongly claimed he had defeated Biden and leveled wild and unsubstantiated allegations of “corrupt forces” who stole the outcome from the sitting president.

In response to the congressional Republicans who have called Biden president-elect identified in the Post survey, Trump tweeted Saturday: “I am surprised there are so many. We have just begun to fight. Please send me a list of the . . . RINOS,” the disparaging acronym for Republican in name only.

Now let’s get to the list of Republicans who have said on record, one way or another (according to the WaPo), that Biden clearly won the election.

Notice that some of these did not respond, so The Post found statements they made and used those as the basis of their placement on the pro-Biden Republican list. 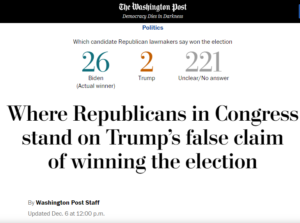 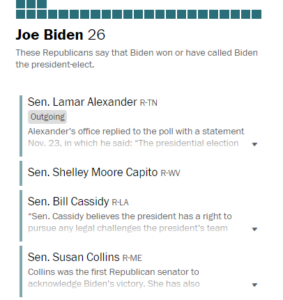 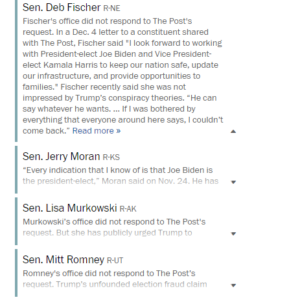 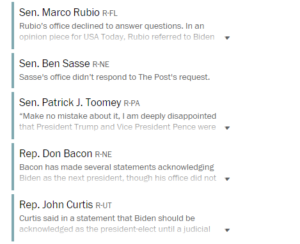 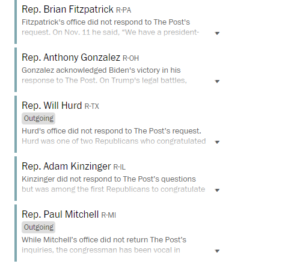 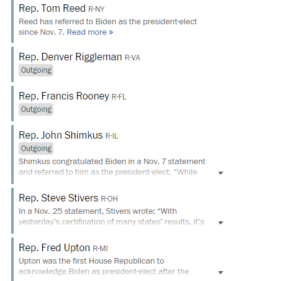 Again, looking for something to do from the comfort of your home!  Call some of these REPUBLICAN offices and tell them what you think—the election is NOT OVER!

I’ll try to remember to go back to the list in a week or so and see how many of your elected officials told The Washington Post that they want to be removed from the list.