Boonsboro, Maryland is a small rural town in conservative Western Maryland. It is near where I live and for the last 35 years I’ve visited friends there, gone to doctor’s appointments there and shopped in its small shopping plaza. It is a town where one could live a peaceful life—until now.

In June, after George Floyd’s death in Minnesota, Roberts’ daughter-in-law, a co-owner of Dan’s  Restaurant & Taphouse, Charlotte Aufdem-Brinke and the restaurant became the central location for Black Lives Matter organizing.

Fine and dandy, Ms. Aufdem-Brinke is free to voice her opinions, organize for Progressive causes, and model her political views for her children.

However, it is what happened next that has many in the community outraged.

She apparently was a lead organizer behind a billboard that was placed prominently in town funded via a GoFundMe account where Aufdem-Brinke is the first donor listed ($500).

(The image below is the ‘corrected’ second billboard as the first one credited “the people of Boonsboro” for paying for the billboard.) 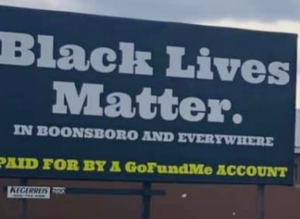 If you want to read the Battle of the Billboards by controversial local agitator Ryan Miner, see it here  but just know that he calls local, long-time residents of the community “hayseeds,” and “Boonsboro’s finest happy-go-lucky hubcap shiners.”

Calling names is a universal trait it seems for Progressives pushing their agenda.

By the way, Miner was not always on the Left, but that is a story for another time.

This is what you really need to know—Progressive Dems cheat (duh!)!

Aufdem-Brinke and fellow Progressives can put up all the billboards they desire, but somehow these Leftists who “model for their kids whose hearts are so pure” can’t seem to not cheat  as we learned in October when it was discovered that someone affiliated with Black Lives Matter and Nora Roberts’ daughter-in-law, listed well-known local conservative Republicans as donors to the billboard fundraising campaign including 2020 Republican Congressional candidate Neil Parrott founder of the Hagerstown Tea Party.

From the Herald Mail less than two weeks before the November election:

Several prominent Washington County Republicans say they have been falsely associated with donating to a Black Lives Matter fundraiser.

Washington County Republican Chair Jerry DeWolf sent an email Thursday morning to Washington County Sheriff Doug Mullendore stating he and several others were fraudulently listed as donors on a GoFundMe fundraiser to put up a Black Live Matter billboard near Boonsboro. He requested the sheriff’s office begin an investigation into the fundraiser organizers and “others who may have participated in this fraud.”

In DeWolf’s email, he said he assumed the act was a “politically motivated attack designed to harass and intimidate,” and he would “personally be interested in pressing the maximum charges available should (the sheriff’s) office find it warranted to do so.”

Of course, the sheriff found nothing criminal. Didn’t this raise identity fraud legal questions?  (We have a weak sheriff here in Washington County.)

Del. Neil Parrott, R-Washington, who is a candidate to represent Maryland’s 6th Congressional District in the U.S. House, was listed as donating $50. He said Friday the donation was not made by him. He said he was made aware of the donation in his name and was surprised that someone would do that.

We must get it through our heads that playing dirty, cheating and lying is how the Left plays this game!  The stolen 2020 Presidential election is a prime example of how far they will go.

Others listed as donors have confirmed the legitimacy of their donations, such as Charlotte Aufdem-Brinke, co-owner of Dan’s Restaurant & Taphouse. Aufdem-Brinke, who was the first donor listed, said Thursday that the donation for $500 was legitimate.***

Aufdem-Brinke said she liked the fundraiser’s message, saying it aligned with the Taphouse’s stance on inclusivity and ending a “hateful mindset.”

Message to local readers:  No “hayseeds,” as Aufdem-Brinke’s pal Ryan Miner calls you, should spend a single dime at Dan’s Restaurant & Taphouse in Boonsboro, Maryland.

Message to national readers:  GoFundMe can easily be manipulated by devious Dems who appear to have no moral compass and who obviously believe that the ends justify the means.

***See the GoFundMe account for the Boonsboro Black Lives Matter billboard and see who the legitimate donors are (after the Republicans were able to remove their names).  How many are actually from Boonsboro?

I’ve created a whole new category here at Frauds & Crooks that I am calling Leftists’ Dirty Tricks.  It appears I will need it going forward.

Is this what the good folks of Boonsboro are supporting.  This happened in Washington DC yesterday: