As regular readers know, I have off-and-on reported on the life and times of Minnesota Rep. Ilhan Omar, see my archive here. 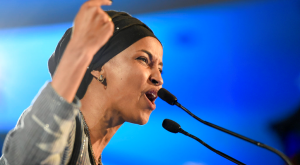 The folks at Powerline blog have been doing incredible investigative work attempting to unravel Omar’s ‘story’ and thereby demonstrating the enormous value citizen journalists are in this age when the mainstream media ignores evidence that, yes, some ‘new Americans’, are frauds and crooks.

STAND BY YOUR SHAM: DATAPOINTS

As I have observed previously in this series, everything about Ilhan Omar is a fraud, including her name. We have seen a plethora of congressional scandals in our history, yet we have never seen scandals like Omar’s in Congress. Here we have something new under the sun.

I would like summarily to set out datapoints supporting the Omar frauds in this almost unbelievable case. Anyone seeking to address the case needs to deal with the following:

Go to Powerline and see over a dozen outstanding concerns Omar refuses to discuss.

Omar is the poster girl for why so many of us are cynical about the refugee admissions program, about Democrats and their hypocrisy, and yes, about the media that refuses to investigate when one of their chosen ones is clearly hiding something!