It looks like all involved are Americans (LOL! I am, after all, fair and balanced here at Frauds and Crooks!).


But, I’m bringing you this news for several reasons and first and foremost I want you to know that a whistleblower filed a lawsuit that provided information about how research data was being fudged (for years!) and has been awarded $33 million as a reward under the False Claims Act.
Good for him!
So keep an eye on possible opportunities for you to turn in someone or some institution that is defrauding Uncle Sam!

The story that is all over the news this morning, involves the National Institutes of Health and the EPA, so the first thing I thought about was how much data involving global warming is being manipulated at the big universities that suck off the US Treasury.
And, in the wake of the Admissions scandal, it is one more example of how the average American is being suckered by elite universities.
From The Chronicle of Higher Education,

Duke University will pay $112.5 million to settle a lawsuit over its alleged submission of falsified data to obtain $200 million in federal research grants.
The lawsuit, filed by a former lab analyst, Joseph Thomas, alleged that from 2006 to 2013 a research technician, Erin Potts-Kant, fabricated data that Duke used to get research funding from the National Institutes of Health and the Environmental Protection Agency.
Thomas also alleged in the lawsuit, filed under the False Claims Act, that Duke covered up the fraud. The university said on Monday in a written statement that its officials discovered the possible fraud only in 2013, after Potts-Kant was fired for embezzlement. The university did not initially understand “the extent of her research misconduct.”

This informative graphic is included with the story, 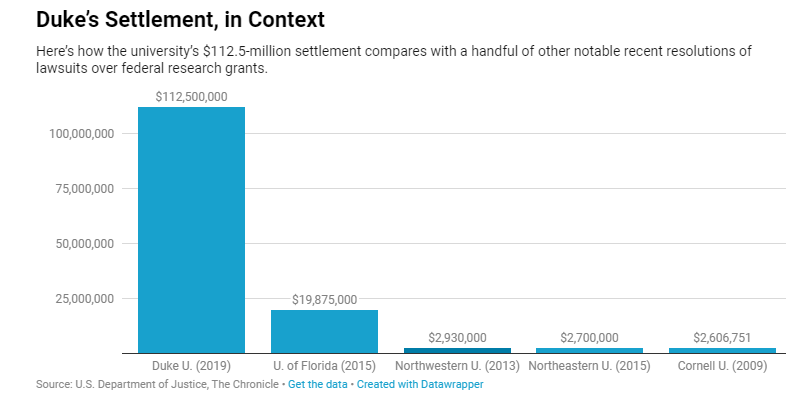 More here.
The US Justice Department press statement from yesterday is here.  This is one tiny bit of it involving the suit initially brought by Thomas,

The allegations were originally brought in a lawsuit filed by Joseph Thomas, a former Duke employee, under the qui tam, or whistleblower, provisions of the False Claims Act, which permit private individuals to sue on behalf of the government and share in any recovery.  The Act permits the government to intervene in and take over the whistleblower’s suit, or, as in this case, for the whistleblower to pursue the action on the government’s behalf.  Mr. Thomas will receive $33,750,000 from the settlement.

I told you about qui tam suits here in January.

3 thoughts on “Duke University Ordered to Repay the Federal Government (you!) $112 Million for Grant Fraud”