….allegations of discrimination in “mission-driven” organizations, which suffer from the same problems they purport to fight, can be especially painful. [ya think!]

However, Cohen’s departure is not the end of the hateful Southern Poverty Law Center as the board has hired former Michelle Obama chief of staff, Tina Tchen, to investigate so that the board can try to clean up the mess.


Most days I get up eager to hit the keyboard with the latest frauds, crooks and cons stories, but today I am especially excited.
When my feet hit the floor (and with coffee in hand), I couldn’t wait to share the news about the internal chaos at the SPLC!
The first shoe to drop, a little over a week ago, was when the SPLC announced it had fired its founder Morris Dees who was the brains behind the money-making scams the organization has run for decades, I said then that Cohen should go since he was in charge of the organization on a day-to-day basis.
The next shoe to drop was the New Yorker story by Bob Moser a former staffer who said, we (employees who knew about the hypocrisy involving the SPLC’s internal and on-going issues with racial tensions and sexual harassment) were part of the “con.”

And, here comes the third shoe!

Headline at the Los Angeles Times,

The president of the Southern Poverty Law Center, Richard Cohen, announced his resignation Friday, the latest in a series of high-profile departures at the anti-hate organization that have come amid allegations of misconduct and workplace discrimination.
The departure will mark the end of an era at the Montgomery, Ala., nonprofit, whose staff had recently raised questions about whether the organization’s long-standing mission of justice and anti-discrimination — which had yielded hundreds of millions of dollars in donations from the public — had matched its internal treatment of some black and female employees. 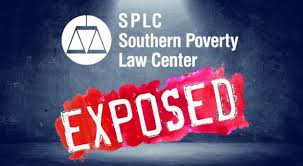 “Whatever problems exist at the SPLC happened on my watch, so I take responsibility for them,” Cohen wrote in an email obtained by The Times, while asking the staff to avoid jumping to conclusions before the board completes an internal review of the organization’s work culture.
Cohen’s resignation comes the same day as a resignation by the organization’s legal director, Rhonda Brownstein, who did not give a reason for her departure in a brief email to her colleagues. Brownstein did not respond to requests for comment.

Tina to the rescue!

Earlier the LA Times reported that the SPLC board announced that it had chosen Tina Tchen, Michelle Obama’s former chief of staff to lead the internal investigation of allegations of racism and sexual harassment (characterized in the media as simply “workplace complaints”) that has reportedly gone on since at least the early 2000’s.

“The events of the last week have been an eye-opening reminder that the walk towards justice must sometimes start at your own front door and force you to look at your past so you can improve your future,” Bryan Fair, chairman of the board of the Southern Poverty Law Center, sent in a message to staff on Monday.

Tchen will “hold a mirror” up to the organization and its leaders, Fair wrote: “No one’s actions, no matter that person’s position at the SPLC, including those of us on the board, will be exempt from scrutiny and accountability.”

“Culture in an organization the size of SPLC isn’t really about one person, even as dynamic as Morris Dees,” Tchen said. She added that allegations of discrimination in “mission-driven” organizations, which suffer from the same problems they purport to fight, can be especially painful.

The leadership of the center is predominantly white, and after one of the center’s black attorneys announced her resignation earlier this month — writing in a message to staff that there was “more work to do” to make women and people of color feel welcome — a group of staffers shared additional concerns with management in a letter.

“SPLC’s integrity is on the line,” the group wrote, adding that internal “allegations of mistreatment, sexual harassment, gender discrimination, and racism threaten the moral authority of this organization and our integrity along with it.”

I doubt that their integrity will go so far as to apologize to individuals like me targeted by their hate labels!
Go here and have a look at those who serve on the SPLC Board of Directors (before their faces are removed from the website!).
These are the people who helped perpetuate the hate group list, who condoned how money was being brought in hand-over-fist from donors frightened by their “research”, and were surely gleeful when uninformed reporters parroted every word coming out of the poverty palace!

What do you do?

You know this news is going to be buried because most publications have used the now imploding SPLC as their source for every “hate” story they ever published.  It is up to you to expose the frauds at the SPLC (including those board members) by spreading the news far and wide throughout your social media networks!

This post is filed in my growing ‘charity fraud’ category, here.