I’ve been writing about this news over at RRW, but figured that since I have more readers here at ‘Frauds and Crooks’ it is important to mention it here as well.

What has me so annoyed is that virtually no reports I have seen, about the soon to begin airlift of supposed ‘interpreters’ out of Afghanistan, ever mention the fact that we have already brought in 70,000 or so special ‘refugees’ from Afghanistan alone in the last few years.

The media makes it sound like this 20,000 waiting for their ticket to America is the beginning of the movement of Afghanistan to a town near you.  It isn’t! We will be conservatively upwards of 100,000, maybe more! before Biden is out of the White House.

And, I say supposed interpreters because the vast majority of those coming are the families of interpreters or anyone who did anything for us.

At what point down the line does it stop?

Here (below) is my post the other day at RRW where I directed you to the numbers we have already admitted including the 2,931 who have already come in this fiscal year (448 in June).

And, in case you are wondering, these numbers are not included in Biden’s 62,500 refugee cap for this fiscal year or his planned 125,000 cap for FY22 that begins on October first of this year.  SIV numbers are over and above that!

Biden to Move Thousands MORE Afghans to Towns Near You

Here is NBC reporting that the first flights are coming this month….

WASHINGTON — A small portion of the thousands of Afghans who worked for the U.S. government will be flown directly to the U.S., while a larger group will be evacuated to third countries or military bases overseas where their visa paperwork will be reviewed, three administration officials told NBC News.

As U.S. troops leave the country, the Biden administration has come under growing pressure from lawmakers, veterans groups and refugee rights organizations to take action to protect Afghans who face retaliation from the Taliban for their work as interpreters or in other jobs for U.S. troops and diplomats.

About 2,500 Afghans whose visa applications have cleared security vetting will be eligible for evacuation directly to a U.S. military base in the U.S., along with their family members, a State Department spokesperson and two Defense officials said.

“Shortly after they arrive, once the medical check-up requirement is complete, their immigration status will be adjusted so they can be eligible for refugee resettlement benefits that will help them and their families with the resettlement process,” the State Department spokesperson said.

Watch for private charter planes unloading Afghans around the US, just as they have been unloading border invaders.

Here they make it sound like 20,000 is the max.  It isn’t at all!  We have already admitted nearly 70,000 Special Immigrant Visas from Afghanistan!

Roughly 20,000 Afghans who worked for the U.S. government over the past two decades have applied for a Special Immigrant Visa (SIV), a program set up for former interpreters, drivers and others who face mortal danger for their association with the United States.

Maybe I should cut the corporate media some slack as they can’t get at the data that I screenshot in 2019 before it was taken down at the US State Department’s Refugee Processing Center.

Special Immigrant Visa Holders Coming in by the Thousands from Afghanistan, but Iraqi Flow has Slowed

And just to remind you, even if they are supposedly vetted, they aren’t able to sort out the riff-raff because of one serious flaw in the vetting process— Muslims are permitted by their ‘faith’ to lie to the infidel!

Here is one bad bunch the military told us to welcome to America!

Have they been deported yet? 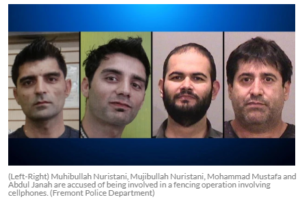 And, you might be interested in this post from last week about the horrific violent crimes, especially being perpetrated against women by Afghan ‘refugees’ in Austria.

Austria’s Afghan Refugee Problem: Will it be Our Problem Soon?