The man on trial for the murder of college student Mollie Tibbets in 2018 took the stand in the final portion of the defense’s case and told the court that two masked and armed men were responsible. 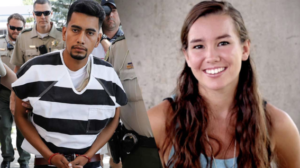 The case makes me so sick that I hadn’t been following it as closely as you likely have, so I was stunned to see the headlines this morning.

Clearly the plan is to sow seeds of doubt among the jurors.

Here is the Des Moines Register:

The man charged with first-degree murder in the slaying of Mollie Tibbetts testified Wednesday that he didn’t kill Tibbetts. Instead, he pointed blame at two unknown masked men — one armed with a gun, another with a knife — who surprised him at his home on the Yarrabee Farms property in rural Poweshiek County the night Tibbetts disappeared.

The men, according to Cristhian Bahena Rivera, forced him to get into his car July 18, 2018, and drive around near Brooklyn, Iowa, before spotting Tibbetts jogging toward town. Bahena Rivera said the men — one named “Jack” — made him circle around several times before stopping along a gravel road near where Tibbetts was last seen.

They drove out of Tibbetts’ sight, Bahena Rivera testified. The man armed with the knife got out of the car for 10 to 12 minutes, while the other sat in the back seat.

Bahena Rivera told the jury he heard the man in the back seat mutter to himself while they awaited the other man’s return to the car, including the phrase “come on, Jack.” The man with the knife then returned, Bahena Rivera said, put something heavy in the trunk and told Bahena Rivera to drive them away.

The men, whom he’d never seen before that night, he testified, then threatened the safety of Bahena Rivera’s family if he dared speak up, including his girlfriend and then-3-year-old daughter, and then allegedly ran off toward a gravel road.

Frightened, Bahena Rivera testified through an interpreter, he went to the car’s trunk, found Tibbetts barely alive — but in such a state that he couldn’t save her — then carried her into a cornfield where he laid her body down.

Stop right there!  I sure hope the prosecutors cross-examined him on his assessment of her ability to live if he had gotten her medical attention.

Continue here for more details of what is clearly a fantasy story.  But, sadly, it might be enough to get a hung jury.

2 thoughts on “Iowa: Illegal Alien on Trial for Brutal Murder Drops Bombshell, Takes Back His Confession”