When you are having a bad month, as the Biden gang surely is, one handy way of distracting from crisis after crisis is to scare the public about ‘white nationalism’ again! 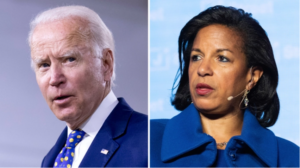 It is ho-hum news, but I’m posting it because it features a clip of Susan Rice expounding on the terrorism threat from white people especially those who believe the 2020 presidential election was stolen.

I think we all need to keep an eye on Rice if Richard Grenell is correct and she is running the White House.

The US Department of Homeland Security has renewed a terrorism advisory bulletin following the “increasingly complex and volatile” threats facing the US, including from “individuals and groups engaged in grievance-based violence” exploited across social media and exacerbated by the coronavirus pandemic.

Following the Capitol insurrection on 6 January and Joe Biden’s inauguration on 20 January, the agency issued a bulletin warning that anti-government “ideologically motivated violent extremists” motivated by “perceived grievances fueled by false narratives” could “continue to mobilize to incite or commit violence” domestically.

That advisory expired at the end of April.

The new advisory – which expires on 13 August – maintains that those threats continue to spread online “with the intent to incite violence” against elected officials, government facilities, law enforcement and “perceived ideologically opposed individuals.”

It also points to their use of social media as a platform to discuss “a race war” by exploiting unrest.

A recently unclassified joint intelligence report – ordered within the president’s first days in office – determined that racially and ethnically motivated violence as well as violent militia groups present the “most lethal” threats in the US.

Perpetrators of racist violence are “most likely to conduct mass-casualty attacks” against Americans, according to a report from Homeland Security, the Office of the Director of National Intelligence and the US Department of Justice.

Domestic violence extremists motivated by “a range of ideologies and galvanised by recent political and societal events” pose an “elevated threat” to the US in 2021, according to the report.

False narratives about the 2020 presidential election, the Capitol insurrection, and conspiracy theories and conditions related to the coronavirus pandemic “will almost certainly” fuel more violence in 2021, the agencies reported.

See my earlier posts at RRW that include Rice during the Obama years by clicking here.