“… it’s his own damn fault for the situation that he is in.” 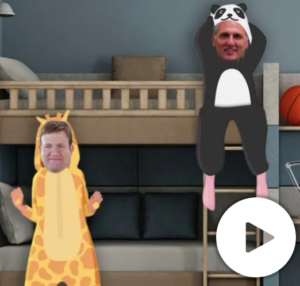 That would be the now laughing stock Republican pollster Frank Luntz who Tucker Carlson exposed in a couple of recent segments on his Fox News program.

But, watch Luntz gain relevance as the Leftwing corporate media uses him to bash Trump and any politicians supporting him.

The Blaze on the latest wet kisses to Luntz from the anti-Trump media:

Longtime Republican pollster and political strategist Frank Luntz slammed Donald Trump on Thursday, predicting his influence would quickly fade and arguing that the former president brought on the bans from various social media platforms by his own actions.

Luntz made the remarks while speaking on the New York Times podcast, “Sway,” with host Kara Swisher just minutes after Facebook’s oversight board upheld the platform’s decision to restrict Trump’s access following the Jan. 6 riot at the U.S. Capitol.

During the interview, the pollster claimed that Trump, though at the moment still influential, will never be able to affect politics in the same way given his lack of access to social media platforms, such as Facebook and Twitter, and his displacement from the Oval Office.

“He’ll never engage in the way he did before, because he simply doesn’t have that capability,” Luntz argued. “He can’t hop on Air Force One. He cannot dominate the news coverage. He can get a sliver of it. And he will continue to do so. He’s not going away.

“That said, it just doesn’t move people the way that it used to,” he continued. “And with every passing month, he’ll become less and less relevant.”

Later in the interview, Luntz proclaimed that “Donald Trump has no one but himself to blame” regarding his indefinite removal from social media platforms.

Is Luntz whispering this to his roomy?

Apparently in that same interview,  propagandist Luntz says that if Trump keeps saying the 2020 Election was a “Big Lie,” that it was indeed stolen, it will cost the Republicans the House in 2022.

Why is anyone listening to looney Luntz?  And, especially why would Kevin McCarthy, the wannabe Speaker of the House, be cohabitating with this weirdo?

How on earth can we trust McCarthy’s judgement after you have a look at the video below.

Luntz, a REPUBLICAN (supposedly), has a million dollar replica of the Oval Office in his California home, and brags about using the cost of the remodeling as a tax deduction.

Luntz’s ego seems to be as fat as his head.  (I don’t make a habit of attacking anyone for their looks and lifestyle, but I am making an exception for Luntz.)

You can hear directly from President Trump at his new social media site:  From the Desk of Donald J. Trump.  Click here.

P.S.  Let me know if you see news about McCarthy moving out of Luntz’s DC pad.