Our friend Leo Hohmann, who has been investigating and reporting steadily for months about the connection between the Chinese virus, The Shot, and more globalist control of society, tells us to fight back. 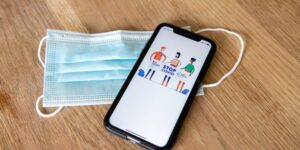 If you love this country and the freedom and liberty that has been our birthright, and even if you have been ‘vaccinated,’ do not take the easy way out and ever give your vaccination status as a price of entry to anyone for any reason. Your health decision choices are still yours and yours alone.

Coincidentally, as I read Hohmann’s latest, Gateway Pundit tells us that the state of Oregon is already dropping the hammer.

IT BEGINS: Fully Vaccinated People in Oregon Must Show Proof of Vaccination Status in Order to Enter Businesses Without a Mask

Oregon has gone from a liberal hell hole to 1930s Germany overnight.

The Oregon Health Authority is now requiring businesses and religious institutions to enforce mask mandates by forcing people to show proof of vaccination.

Don’t patronize any business, or even your church, if demands are made for this outrageous price of entry.

The worst nightmare for patriots and freedom lovers throughout the world may be about to come true.

The push is on to sneak health passports into America and other Western democracies through back-door channels.

Big corporations and universities are testing the waters to find out how many Americans will accept this latest intrusion as an unavoidable part of life in the “new normal.”

They have baited the trap, promising this will be your ticket to reclaiming your former freedoms. All you have to do is submit to this little app on your phone that informs businesses whether you’ve been vaxxed or not. How many will walk into that trap, surrendering their health privacy and eventually all of their personally identifiable information, remains to be seen.

We have a very short window in which to stand and reject this attempt by big business, in collusion with big government, to impose the most invasive, intrusive and coercive measures ever seen on people of the free world since the conclusion of World War II and the Nuremburg trials.

Biden says the “rule is simple.” Get the shot, or continue to wear the mask.

News flash: This is America. We don’t get up in the morning and check in with you, Mr. Biden, or any other government official, to get our “rules” for the day. That’s just not the way a constitutional republic works.

But if we accept this new normal and submit to health passports, then we have in essence given up on America and its time-honored, bedrock principle that has made this country special, the idea that individual freedom takes precedence over collectivism, which always leads to tyranny. We have taken that grand idea and thrown it in a pile of excrement. We have spit on the Constitution and said we no longer want it to serve as the highest law in the land.

We have conceded to globalist tyranny coming down from the World Health Organization, a United Nations agency funded by Bill Gates and dominated by the Chinese Communist Party.

By the way, on immigration issues how often have we been derided for furthering division by promoting the concept of ‘otherness’ which the Leftists say is bad, very bad, and yet here they are creating further division in America using The Shot to create otherness.