Last week you could hardly have missed the news about the controversy swirling around the firing of a Space Force officer who promoted a self-published book about how the US military was succumbing to Marxist methods to root out “extremists” and push the military toward the political Left.

A Space Force commander was fired last week after public comments made while promoting his book criticizing Marxist ideals in the military.

Military.com first reported that 11th Space Warning Squadron commander Lt Col. Matthew Lohmeier was fired over “a loss of confidence in his ability to lead” after he joined L. Todd Wood’s “Information Operation” podcast to promote his self-published book, “Irresistible Revolution: Marxism’s Goal of Conquest & the Unmaking of the American Military.”

A Space Force spokesperson told Military.com that Lohmeier’s firing was “based on public comments made by Lt. Col. Lohmeier in a recent podcast,” adding that “Lt. Gen. Whiting has initiated a Command Directed Investigation on whether these comments constituted prohibited partisan political activity.”

On the podcast, Lohmeier – a former fighter pilot and instructor – criticized the military’s expanded diversity and inclusion training and focused mission to root out extremism in the ranks – efforts spearheaded by Secretary of Defense Lloyd Austin.

He said the policies are “rooted in critical race theory, which is rooted in Marxism” and impacting the culture of the military. Those changes “will divide us, it will not unify us,” Lohmeier said.

Lohmeier said he was given a 70-page booklet on extremism training “talking points” with which to train his squadron. Among those talking points were examples including the Jan. 6 storming of the U.S. Capitol as an act of extremism.

An author well-known to readers of my blogs, our friend James Simpson, just last week published his own book on how Marxist ideology has taken root in Joe Biden’s America. 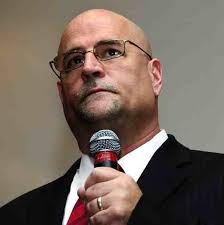 It seems extraordinary to me that we would have to educate or re-educate Americans to the threat of Communism.  It was only a few decades ago that no one in respectable political circles used the C-word (or the M-word) if they wanted to be taken seriously.

Now, one must get comfortable using those words and discussing the subject.

Simpson will get you started…..

Who Was Karl Marx?: The Men, the Motives and the Menace Behind Today’s Rampaging American Left 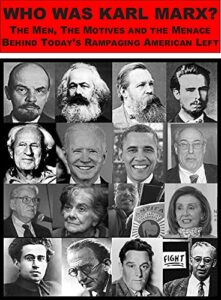 The Left is rampaging across our nation today. Portland, Oregon is burning and many other cities face continuous looting, rioting and destruction. And while the Antifa/Black Lives Matter mob is wreaking havoc, destroying businesses and neighborhoods, leaders in those communities have taken an inexplicable hands-off attitude, even to the point of restraining a police response. Meanwhile, the Democrat Party, Big Tech, the media and institutional Left have turbocharged censorship and vilification of their political enemies. How did we come to this, who caused it, what are their motivations and how do we stop it?

Here is a snip of a small portion of the Table of Contents to whet your appetites about what you will learn in Simpson’s Marxism tutorial. 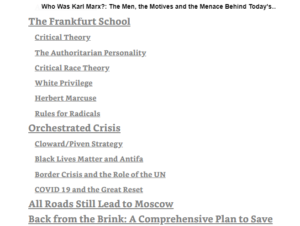 I am headed over to Amazon now to buy both books.

It is vitally important for us to support (if our finances permit) authors forced by the woke publishing mob to self-publish their work.