If you are like me and saw this story yesterday, you probably said, well heck I knew that, and moved on to more interesting reading.

However, reader Cathy sent me the newly unemployed editor’s letter to AG Sulzberger and I found it a very worthwhile read, so I’m posting a bit of it here with a link to the whole stinging rebuke, of not just the NYT, but of most of the legacy media today.

If you don’t know about the controversy here is a story by Howard Kurtz of Fox News today.

Message to you (and to me!), if they are calling you a “Nazi” and a “racist” wear the label with pride because it means you have gotten under their skin.

Bari Weiss to the NYT:

(with a little emphasis from me) 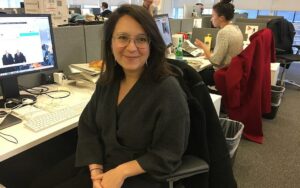 It is with sadness that I write to tell you that I am resigning from The New York Times.

But the lessons that ought to have followed the election—lessons about the importance of understanding other Americans, the necessity of resisting tribalism, and the centrality of the free exchange of ideas to a democratic society—have not been learned. Instead, a new consensus has emerged in the press, but perhaps especially at this paper: that truth isn’t a process of collective discovery, but an orthodoxy already known to an enlightened few whose job is to inform everyone else.

Twitter is not on the masthead of The New York Times. But Twitter has become its ultimate editor. As the ethics and mores of that platform have become those of the paper, the paper itself has increasingly become a kind of performance space. Stories are chosen and told in a way to satisfy the narrowest of audiences, rather than to allow a curious public to read about the world and then draw their own conclusions. I was always taught that journalists were charged with writing the first rough draft of history. Now, history itself is one more ephemeral thing molded to fit the needs of a predetermined narrative.

My own forays into Wrongthink have made me the subject of constant bullying by colleagues who disagree with my views. They have called me a Nazi and a racist…

I do not understand how you have allowed this kind of behavior to go on inside your company in full view of the paper’s entire staff and the public. And I certainly can’t square how you and other Times leaders have stood by while simultaneously praising me in private for my courage. Showing up for work as a centrist at an American newspaper should not require bravery.

Part of me wishes I could say that my experience was unique. But the truth is that intellectual curiosity—let alone risk-taking—is now a liability at The Times. Why edit something challenging to our readers, or write something bold only to go through the numbing process of making it ideologically kosher, when we can assure ourselves of job security (and clicks) by publishing our 4000th op-ed arguing that Donald Trump is a unique danger to the country and the world? And so self-censorship has become the norm.

Keep reading, it gets even better.