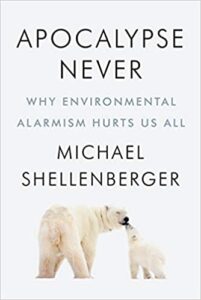 There is nothing the Hard Left hates more than someone in their bubble breaking out and telling the truth about what the extremists have been saying for decades.

That’s why Michael Shellenberger is going to be vilified and why you should buy his book to show support for a brave truth-teller. At Amazon.

Here (hat tip: Cathy) he explains why he had to speak up now and one reason is that he has a teenage daughter who was fearful because the likes of Democrat Rep. Alexandria Ocasio-Cortez are saying that unless we make drastic changes, the world will end in only a few years due to the climate change “crisis.”

On Behalf Of Environmentalists, I Apologize For The Climate Scare

On behalf of environmentalists everywhere, I would like to formally apologize for the climate scare we created over the last 30 years. Climate change is happening. It’s just not the end of the world. It’s not even our most serious environmental problem.

I may seem like a strange person to be saying all of this. I have been a climate activist for 20 years and an environmentalist for 30.

But as an energy expert asked by Congress to provide objective expert testimony, and invited by the Intergovernmental Panel on Climate Change (IPCC) to serve as Expert Reviewer of its next Assessment Report, I feel an obligation to apologize for how badly we environmentalists have misled the public.

Humans are not causing a “sixth mass extinction”

The Amazon is not “the lungs of the world”

Fires have declined 25% around the world since 2003

The build-up of wood fuel and more houses near forests, not climate change, explain why there are more, and more dangerous, fires in Australia and California

Carbon emissions are declining in most rich nations and have been declining in Britain, Germany, and France since the mid-1970s

I know that the above facts will sound like “climate denialism” to many people. But that just shows the power of climate alarmism.

I became an environmentalist at 16 when I threw a fundraiser for Rainforest Action Network. At 27 I helped save the last unprotected ancient redwoods in California. In my 30s I advocated renewables and successfully helped persuade the Obama administration to invest $90 billion into them. Over the last few years I helped save enough nuclear plants from being replaced by fossil fuels to prevent a sharp increase in emissions

But until last year, I mostly avoided speaking out against the climate scare. Partly that’s because I was embarrassed. After all, I am as guilty of alarmism as any other environmentalist. For years, I referred to climate change as an “existential” threat to human civilization, and called it a “crisis.”

But mostly I was scared. I remained quiet about the climate disinformation campaign because I was afraid of losing friends and funding.

The few times I summoned the courage to defend climate science from those who misrepresent it I suffered harsh consequences. And so I mostly stood by and did next to nothing as my fellow environmentalists terrified the public.

But then, last year, things spiraled out of control.

Continue reading here.  There is much, much more.

Even if you don’t read the whole book, go buy it!  Brave men like Michael Shellenberger must be supported.

And, just a reminder, the Left is very active now promoting the concept of ‘climate refugees’ as the next big reason that the western world (responsible for climate change they say!) must open borders to millions of migrants as a new class of refugee. See RRW’s ‘climate refugees‘ category.