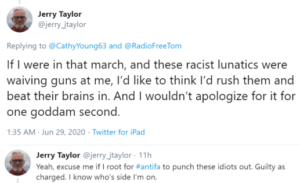 More of this is needed in my opinion.  Where is a poster for every city in America that is suffering from the actions of illegal rioting/destructive punks?

President Trump on Friday tweeted out an FBI wanted poster picturing 15 unidentified suspects wanted in connection with the attempted toppling of a statue of Andrew Jackson in the capital — along with a stern warning.

“MANY people in custody, with many others being sought for Vandalization of Federal Property in Lafayette Park. 10 year prison sentences!” the commander-in-chief tweeted. 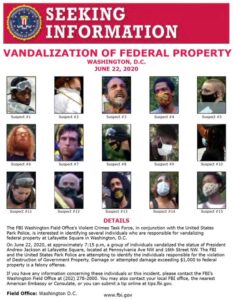 “The FBI’s Washington Field Office’s Violent Crimes Task Force, in conjunction with the United States Park Police, is interested in identifying several individuals who are responsible for vandalizing federal property in Lafayette Square,” the poster says, referring to the statue, which is a stone’s throw from the White House.

The feds ask anyone with information to contact the task force or their local FBI office.

This reminded me that I once downloaded an FBI poster of Most Wanted Islamic Terrorists, so I went to the FBI website and found that, yes, you can still download FBI posters like the one above.

Go here for the ‘Vandalization of Federal Property’ poster and see the many other posters you can get.  You can get a little better look at the creeps!

Delayed due to the Chinese Virus says the Dallas Morning News,

Over two years after Billy Chemirmir’s arrest, families who say their elderly loved ones were killed by the serial murder suspect are wondering what’s taking so long for county officials to declare the deaths homicides.

Dallas County Medical Examiner Jeffery Barnard said Wednesday that the coronavirus pandemic has slowed the process of amending those death certificates but that he will work to clear the cases by the end of July.

The death certificate revisions aren’t the only part of the investigation into Chemirmir that has been slowed by the pandemic. His attorney, Phillip Hayes, said Thursday that the virus also will delay his criminal trial.

Chemirmir, 47, has been indicted in the deaths of 14 elderly people in Dallas and Collin counties, and civil lawsuits name him as a suspect in the deaths of eight others. A Kenyan immigrant with permanent resident status in the U.S., he is in the Dallas County Jail in lieu of $11.6 million bail.

The number of potential victims could make Chemirmir among the most prolific serial killers in Texas history. He maintains he is innocent.

Some of the victims’ family members are strongly voicing their objections to further delay by the Medical Examiners office.

Secure Our Seniors Safety, a nonprofit founded last year by the daughters of four of Chemirmir’s alleged victims, says that at least five cases are awaiting amendment from “natural causes” or “old age” to homicide.

Throughout 2018, nearly two dozen families in North Texas received the shocking news that police were re-investigating their loved ones’ deaths as possible murders. The calls came as much as two years after their loved ones died at luxury senior living communities and private homes in Dallas, Richardson, Plano and Frisco.

The families had no choice but to wait for the causes of death to be amended and the cases to be presented to a grand jury.

For some, the wait lasted just a few weeks. Others waited months. Some are still waiting.

I highly recommend that you read the whole story.

The Dallas Morning News is the only larger media outlet to report on the gruesome story since it first broke in the spring of 2019.

Nobody says this, but you know it…..

Frankly, if the killer was white and the victims black senior citizens this would be news trumpeted across the world on a regular basis. CNN  and the New York Times would have reporters camped in Dallas to report every detail of the story.

Heck, the Antifa rioters would likely have torn the jail down by now!

See my Billy Chemirmir (the Kenyan Killer) archive.  (There are some stories in the archive in which I just reference him in relation to other criminal cases.)

Todd Bensman, writing at the Center for Immigration Studies, thinks that is possible.

Evidence continues to mount that spikes in Covid cases in U.S. border states are due to successive waves of infected people fleeing Mexico’s dysfunctional and overwhelmed hospitals to get American medical care at least as much, if not more than, to the re-opening of those states’ economies.

This matters because officials in border states are beginning to base policy decisions for partial lock-downs on grounds that lifting them is what caused the spikes.

Although the states and hospitals do not release nationality or immigration status information, several Border Patrol agents told the Center for Immigration Studies that, per policy, they have been transporting to U.S. care facilities increasing numbers of illegal Central American border-crossers they apprehend who report Covid-like symptoms, as well as Cubans, Venezuelans, Ecuadorans, and other nationalities.

The U.S. Customs and Border Protection’s media relations office was not able confirm the extent to which that was happening, but did release the following statement regarding Border Patrol hospital runs such as those the agents described.

“CBP has longstanding procedures in place to ensure that the individuals we encounter are able to receive treatment from local health authorities or other medical professionals. All persons in CBP custody who meet the Center for Disease Control’s Covid-19 travel history and enhanced screening guidelines are being referred to the CDC or local health officials for additional screening. CBP takes all necessary precautions to ensure that no communicable diseases are spread across populations in custody.”

Earlier, the Washington Post, the New York Times, and the Wall Street Journal all reported a crush of infected people from Mexico coming over the Arizona and California borders, although the publications say all appear to be American expatriates, dual citizenship holders, and Mexican legal permanent residents.

States appear to be transporting many to interior facilities to keep bed space free on the border as the influx continues, adding to the impression that these imported patients were infected inside the United States due to lifting lock-downs rather than in Mexico, where few social distancing measures were implemented.

The Times and now Reuters have reported that California, for instance, has been airlifting Covid patients from “saturated” border clinics to hospitals in the state’s interior.

I know, nothing you didn’t already assume, but I’m posting this to encourage you to follow the opposition. Knowledge is power!

Sign up, as reader Bob did, and receive regular missives from those groups working to transform America, two prime examples being the Southern Poverty Law Center and the Council on American Islamic Relations (CAIR).

As I have reported recently, there is tension between Arab/South Asian Muslims and blacks so the leadership at CAIR obviously determined that it needed to suck up to BLM.

See CAIR unfurl its banner over its Washington, DC headquarters:

And now see them chortling over a couple of white scalps in California.

(FRESNO, CA, 6/25/20) – The Central California office of the Council on American-Islamic Relations (CAIR-CC) today welcomed the recent resignations of two school officials after they posted bigoted content on their Facebook pages.

“If you don’t Love the Country you live in, then go back to the country you or your ancestors came from. I’m SICK of this S***.”

He resigned Tuesday from his position.

At the beginning of this week, the private Facebook account of Sara Wilkins, the president of the Madera County Board of Education, shared an image of a Confederate flag and stated: “I am proud to be white.” The post also read, “I bet no one passes this on because they are scared of be called a racist.”

A change.org petition, “Sara Wilkins needs to step down, resign, or be fired,” gained more than 1,500 signatures.

The Madera County Superintendent of Schools announced Wilkins’ resignation Thursday. In a statement, CAIR-CC Outreach Director Sukaina Hussain said: “We welcome the resignations of these public officials after their disturbing posts.

You will find a ‘sign-up’ opportunity on CAIR’s website. It is extremely useful to know what they are doing.

It is about silencing you and making you fearful, an important first step in their goal to destroy our cherished American way of life.