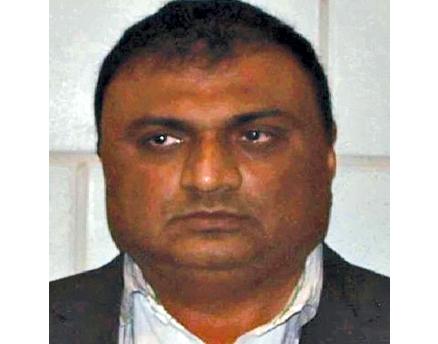 Before I get to the Department of Justice press release from Thursday, I want to tell you about his first go-round in prison just a few short years ago.

A Michigan medical clinic owner has been sentenced to four years in prison for a healthcare kickback scheme, according to an AP report.
Forty-four-year-old Babubhai Rathod of Okemos also has been ordered to make the remaining $50,000 in a $950,000 restitution payment.
Rathod pleaded guilty in November to conspiracy to pay and receive healthcare kickbacks. He was the owner of clinics, outpatient rehabilitation facilities and home healthcare companies statewide.
[….]
The Grand Rapids Press adds: Before a federal investigation shut him down, Rathod owned 23 medical facilities and employed more than 400 workers.
The government alleged that the kickback scheme funneled patients to clinics he owned.
[….]
For referring patients, medical workers received $50 for a patient covered by Medicaid, and $100 for a patient insured by Blue Cross Blue Shield of Michigan, Medicare, an auto insurer or worker’s compensation plan, the government said.

Rathod “has always been an unusually caring, generous and loving husband and father with strong religious beliefs, and he has always been deeply committed to his Indian culture. He generously gives his time and money to important charitable and social causes in India and in the local Indian community.”

Now move forward in time to last week, and see that he did serve some prison time, was released early and proceeded to rip us off again!

From the US Justice Department,

See how he lied in prison and came up with a scheme to get out early.

In 2013, Rathod was sentenced to four years in prison—and was further excluded from participating in Medicare and Medicaid—after being convicted of paying practitioners illegal kickbacks in exchange for patient referrals to his health care companies. While in prison, Rathod faked a drug and alcohol use disorder in order to qualify for admission into the Residential Drug Abuse Program (“RDAP”). Rathod completed RDAP and was released early from custody. Within days of his release in 2016, Rathod began violating his exclusion and supervised release conditions by operating four health care providers across the State of Michigan: Advanced Medical Services (d/b/a Advanced Sleep Diagnostics of Michigan); Sleep Diagnostics of Michigan; EZ Sleep Supplies; and Paramount Home Care. To conceal his ownership of these providers from Medicare and Medicaid, Rathod used a variety of aliases, straw owners, and shell holding companies that were registered to other people. Rathod’s scheme netted nearly a million dollars in Medicare and Medicaid reimbursements to which his providers were not entitled.

He stole the identity of a doctor to set up the newest scams!

It isn’t just the loss to Medicare and Medicaid that taxpayers must bear, even the cost of catching, prosecuting and incarcerating this new American falls on us.  The US Attorney touched on just one aspect of that with this comment,

“The resources [aka money!-ed] it took to unravel Mr. Rathod’s elaborate scheme reflects our commitment to holding accountable those who would violate their federal program restrictions,” U.S. Attorney Birge said.

More here.
Rathod is the kind of guy we should force to pay back the money by selling whatever he owns, then deport him and never let him come back.  Make him take his immediate family with him!
By the way, I think Michigan may win the Medicare/Medicaid fraud sweepstakes here at Frauds and Crooks!

It is very important for all of you to keep an eye on any medical providers you use and report anything suspicious involving your insurance, your Medicare and all recommendations for additional medical services.   LOL! Especially if you live in Michigan!

And on the political front, it does appear that the Trump Justice Department is working hard to ferret out fraud and waste involving our tax dollars. If I were running his campaign I would be telling him to tout their successes in catching creeps like this one! At every rally he could cite another successful bust!

2 thoughts on “Michigan: Indian-American Sentenced to Twelve Years in the Slammer for Stealing $1 Million from Us”