CNBC recently published a list of the Top Ten Scams that are perpetrated against seniors in the US.

Scams cheat older Americans out of almost $3 billion a year. Here’s what to watch for

Seniors lose an estimated $2.9 billion annually from financial exploitation, according to the Senate Special Committee on Aging. 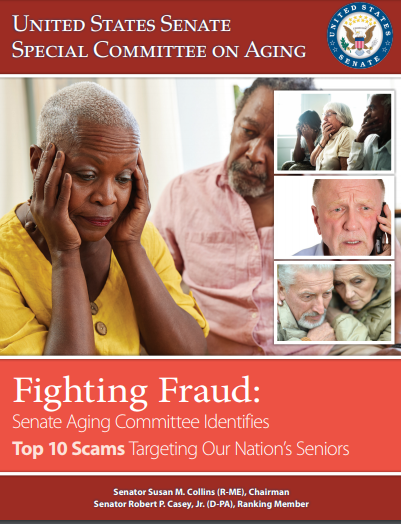 Impersonating the IRS was the No. 1 scam targeting seniors in 2018.
More than 1,500 seniors across the country contacted the committee’s fraud hotline in 2018; however, Kansas Attorney General Derek Schmidt said in recent testimony that only 1 in every 24 cases of elder exploitation gets reported.
“Despite that under-reporting, statistically one in every 10 Americans age 65 or older who lives at home will become a victim of abuse,” he wrote.
Here are the top 10 scams targeting seniors last year, according to the Senate aging committee’s 2019 Fraud Book:

For a description of each of the ten, go back to CNBC or the Fraud Book mentioned above.

Identity thieves not only drain bank accounts and charge credit cards, but they also defraud the government and taxpayers by using stolen personal information to submit fraudulent billings to Medicare and Medicaid.
The Senate aging committee recommends that victims place a fraud alert, report identity theft or file a police report if a scam is suspected.

Sit down with elderly relatives and explain the kinds of frauds that they might experience and then take time and report fraud or suspected fraud.
Almost a day doesn’t go by that I don’t get some call about “free” knee braces and such!  How about you?