How many times have you heard it from the mainstream media—Americans are criminals at a higher rate than immigrants, so those new American wannabes flooding our border pose no threat!
Well, that is fake news!
In case you missed the new report at the Federation for American Immigration Reform, John Binder writing at Breitbart has the numbers.

Study: Illegal Aliens Up to 5X More Likely To Be in Prison Than Americans

Illegal aliens concentrated in ten U.S. states are up to more than five times as likely to be in prison for crimes than American citizens and legal immigrants, a new study reveals.
Research by the Federation for American Immigration Reform (FAIR) analyzed states with the highest concentration of illegal aliens — including Arizona, California, Florida, Nevada, New Jersey, New Mexico, New York, Oregon, Texas, and Washington — debunking claims by the big business interests and open borders lobby that the illegal alien population is generally harmless to Americans. 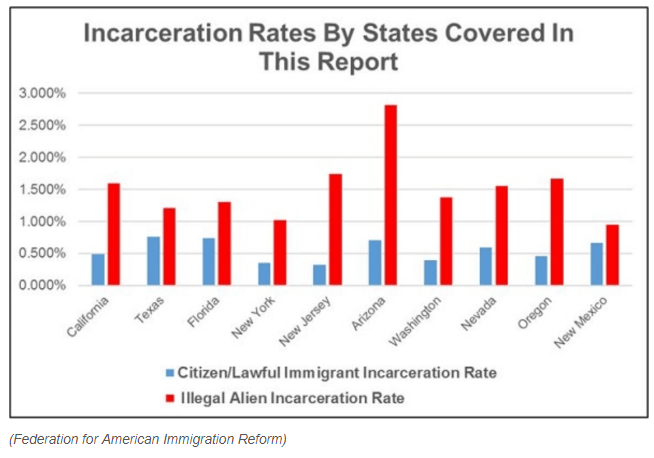 For example, the FAIR study found that in New Jersey, which has a generally small prison population, illegal aliens are about 5.5 times more likely to be incarcerated than American citizens and legal immigrants.
[….]
As Breitbart News has extensively reported, criminal foreigners in federal prison cost American taxpayers about $1.4 billion every year. Likewise, mass immigration to the U.S. from primarily Central America has led to a booming foreign incarcerated population from the region.
Between Fiscal Year 2011 and 2016, about 91 percent of all criminal illegal and legal immigrants in federal U.S. prisons were nationals from Mexico, Honduras, El Salvador, Dominican Republic, Colombia, and Guatemala, Breitbart News reported.

What can you do?  You should bookmark the FAIR report or Binder’s piece and the next time you see news from, for instance, some Leftwing politician, that Americans commit crimes at a higher rate than “new Americans,” take time to let the media outlet or the elected official know that they are wrong.

Better still don’t wait and write a letter to the editor for your local paper with the statistics!